As One of the Foundation and Pillar Industries of the Material Industry, Soft Ferrite Cores Have a Lot of Development Opportunities

Soft ferrite cores are materials that are easily magnetized and demagnetized, which are primarily used to enhance or guide the magnetic flux produced by an electrical current. Soft ferrite cores are widely used in power electronic circuits, such as voltage and current transformers, saturable reactors, magnetic amplifiers, inductors, choke coils, etc. These magnetic devices may need to operate at frequencies of 50/60 Hz or as low as DC or above 1 MHz. 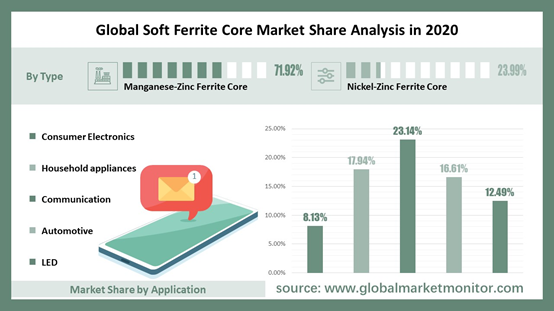 Soft ferrite cores are widely used in consumer electronics, household equipment, communications, automobiles, LEDs and other fields. With the miniaturization of electronic components such as notebook computers, computers, and mobile phones, the applied components must be correspondingly high-frequency and chip-based, and the magnetic loss must be greatly reduced in order to achieve low heat generation and energy saving of their soft ferrite cores. In the future, home appliances will be dominated by high-definition, large-screen, and digital filtering, and flat-panel TVs will account for a larger proportion, which puts forward stricter requirements for magnetic material products. The higher the frequency, the higher the operating frequency of the soft ferrite core is required. Soft ferrite cores are used where efficient coupling between current and magnetic flux is required. They form an important part of the inductors and transformers used in major communication applications today. Soft ferrite cores for automotive applications can be used in harsh conditions and require inductors with high stability to withstand external stresses and changes in operating temperature during plastic molding. The biggest advantage of using soft ferrite core material LED as light source is energy saving and environmental protection, long service life, no stroboscopic, and protection of eyesight. If all current lighting sources are replaced by LEDs, the global lighting power consumption will be cut in half. 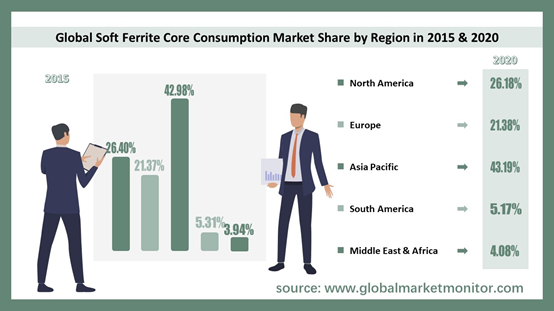 Get the Complete Sample, Please Click:https://www.globalmarketmonitor.com/reports/879446-soft-ferrite-cores-market-report.html

At present, in developed countries, the soft ferrite core industry is usually at a high level. The largest companies are mainly concentrated in Japan and China. Compared with Chinese companies, foreign companies have relatively high manufacturing costs. With the development of production technology, the share of China soft ferrite cores in the international market has continued to increase, and its competitiveness in the international market has gradually increased.

China has become a major consumer of international soft ferrite cores, but the production technology of some low-end products is relatively backward. Although new production lines are constantly being added, high-end products still rely on imports. my country\'s soft ferrite core industry has developed into a national-level industry with certain R&D and production capabilities, and the product structure is gradually improving. With the rapid growth of the national economy and the rapid development of downstream industries, consumer electronics products have maintained steady growth in China, and automotive electronics products have continued to grow despite the global economic downturn. The strong market demand for ferrite cores in China provides a good opportunity for the development of the ferrite core market and technology.

With the development of production and application technology of high temperature resistant iron powder core manufacturers, soft ferrite cores are constantly innovating and improving in the fields of inductors, transformers, filters and other applications to meet market demand. Due to research on soft ferrite cores, various shapes of cores made of soft ferrite materials have been formed. Different combinations of these cores have different performance and characteristics to meet people\'s different needs. Magnetic cores made of these materials are widely used in radio, television, communications, computer technology, automatic control, aerospace technology, electronic equipment and other IT industries. And used to make all kinds of transformers, inductors, choke coils, suppressors, filters and other devices. These factors drive the growth of the soft ferrite core market. 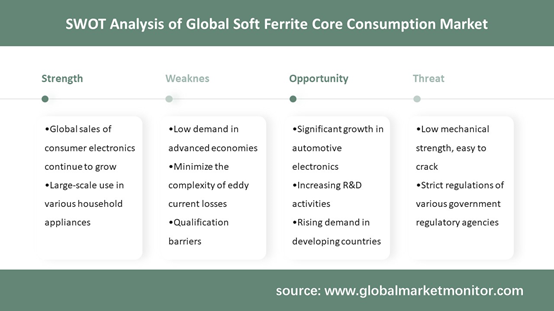 Get the Complete Sample, Please Click:https://www.globalmarketmonitor.com/reports/879446-soft-ferrite-cores-market-report.html