As the Population Ages Across the Globe, the Demand for Cancer Treatments Will Increase, Which Will Also Lead to an Increase in the Demand for Kinase Inhibitors

In biochemistry, kinases are a class of enzymes that transfer phosphate groups from high-energy donor molecules to specific target molecules. The largest group of kinases are protein kinases. Kinase inhibitor is an enzyme inhibitor that can block the action of kinase. Kinases add phosphate groups to specific target molecules during phosphorylation, which affects their activity and functional levels. Protein kinase inhibitors can be subdivided according to the amino acids (such as serine, threonine or tyrosine) on the phosphoprotein to inhibit the phosphorylation of amino acids. Phosphorylation is usually a necessary step in the development of certain cancers and inflammatory diseases, so inhibiting the enzymes that trigger phosphorylation can provide a way to treat these diseases. In the past 30 years, kinase inhibitor drugs have made great progress. So far, a total of 38 kinase inhibitor drugs have been approved for marketing. 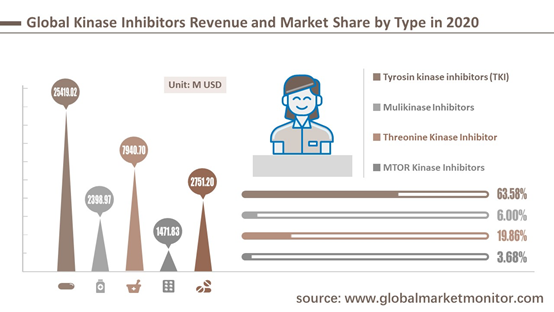 Kinase inhibitors have a wide range of applications, generally in the development of anti-cancer drugs, mainly for NSCL cancer and hematological malignancies, and their market shares in 2020 will account for 27.27% and 26.23%, respectively. Other application areas include rheumatoid arthritis, hepatocellular carcinoma, renal cell cancer, cancer of the ovaries, pancreatitis, glioblastoma, Parkinson disease, Crohn disease, etc. By 2026, the market share of the two fields of hepatocellular carcinoma and renal cell carcinoma will significantly expand. 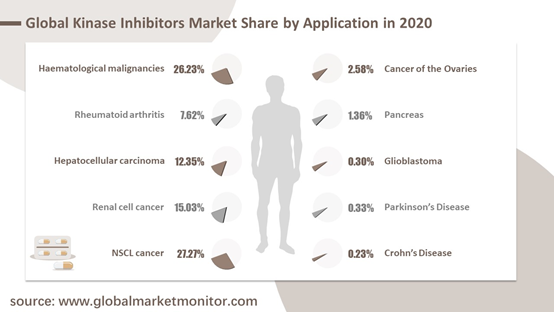 Companies in the industry are mainly from Europe, with pretty high market concentration. The top three companies are Pfizer, Novartis and AstraZeneca, with revenue market shares of 24.75%, 19.51% and 10.14% in 2019.

North America is the largest revenue market, with a market share of 41.67% in 2015 and 38.76% in 2020, a drop of 2.91%. Europe ranked second with a market share of 32.17% in 2019. In addition, the economic development, increased downstream demand, and technological innovation and progress of China, India, Brazil and other emerging economies will promote the increase in the demand for kinase inhibitors. The Asia-Pacific, Middle East, and African markets are expected to become the fastest growing markets in the industry. 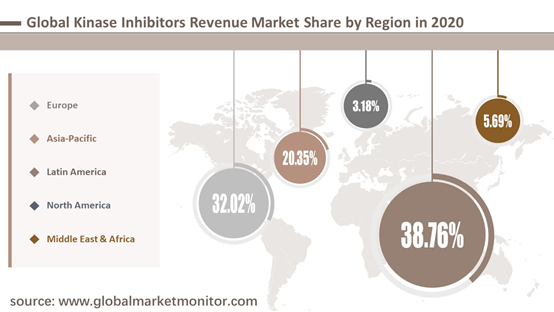 Cancer is the second leading cause of death in the world, with an estimated 9.6 million deaths from cancer in 2018. According to United Nations data, on a global scale, the population of 65 and over is growing faster than all other age groups. Aging is the most important risk factor for overall cancer and many individual cancer types. According to statistics from NCI surveillance, epidemiology, and final results program, the median age of cancer diagnosis is 66 years, and many common cancer types have similar patterns. Therefore, as populations around the world become increasingly aging, the demand for cancer treatments will increase, which will also lead to an increase in the demand for kinase inhibitors. 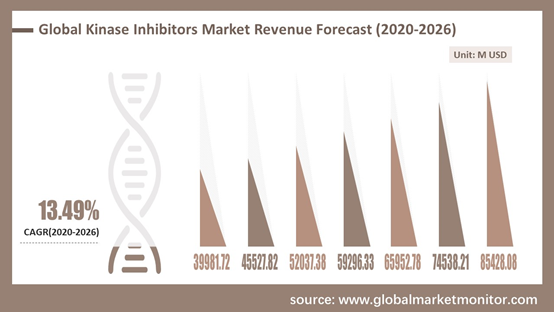 According to research, the total sales of the global kinase inhibitor market in 2015 was US$20,081.05 million, and by 2020 it will increase to US$39981.72 million. Due to the prevalence of cancer and the increase in the number of patients, the global kinase inhibitor market is expected to experience moderate growth during the forecast period. Therefore, we predict that by 2026, the market value of kinase inhibitors can reach US$85,428.08 million, with a compound annual growth rate of 13.49% from 2020 to 2026.