Most of the time, genetic testing is done through healthcare providers. Healthcare providers determine which test is needed, order the test from a laboratory, collect and send the DNA sample, interpret the test results, and share the results with the patient. Direct-to-consumer genetic testing is different: these genetic tests are marketed directly to customers via television, print advertisements, or the Internet, and the tests can be bought online or in stores. Customers send the company a DNA sample and receive their results directly from a secure website or in a written report to directly get access to their genetic information.

Direct-to-consumer genetic testing has sparked much controversy and undergone dramatic changes in its brief history. As people have become more proactive in managing their health, personal genomic direct to consumer testing has become more popular over the past decade. 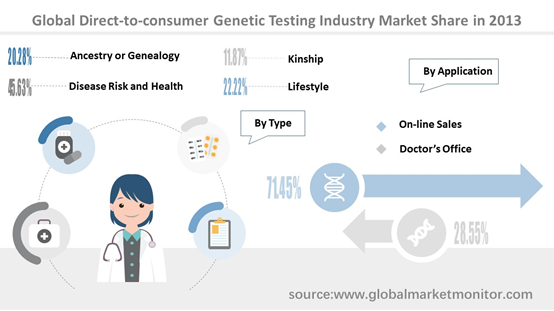 Direct-to-consumer genetic testing can be divided into four categories: The first is disease risk and health. The results of these tests estimate your genetic risk of developing several common diseases, such as celiac disease, Parkinson disease, and Alzheimer disease. Some companies also include a carrier for less common conditions, including cystic fibrosis and sickle cell disease. The second is ancestry or genealogy. The results of these tests provide clues about where ancestors of a person might have come from, their ethnicity, and genetic connections between families. The third is kinship. The results of these tests can indicate whether tested individuals are biologically related to one another, but the results of direct-to-consumer kinship tests, including paternity tests, are usually not admissible in a court of law. The last one is lifestyle. The results of these tests claim to provide information about lifestyle factors, such as nutrition, fitness, weight loss, skincare, sleep, and even your wine preferences, based on variations in your DNA. Many of the companies that offer this kind of testing also sell services, products, or programs that they customize on the basis of your test results.

Consumers can choose to buy genetic testing services online or at an office of doctors. On-line sales are a form of electronic commerce where consumers find a product of interest by visiting the website of the retailer directly or by searching among alternative vendors using a shopping search engine. Offices of doctors are the primary place where ambulatory care is given, and are often the first place that a sick person would go for care.

North America was the largest revenue market with a market share of 67.18% in 2018 and 35.34% in 2025. In 2025, the European market share was 27.68%, ranking second. In addition, the Asia Pacific, India, Middle East and South America Direct-to-consumer Genetic Testing market is expected to be the growing market. 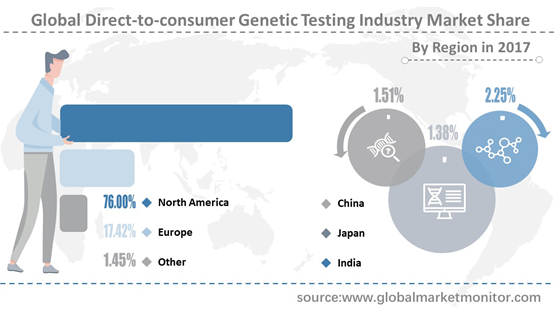 Direct-to-consumer Genetic Testing is mainly from the United States. The Americas dominates the global embolic particle market. High market maturity, technical and financial advantages, production capacity, and the development of new technologies, the availability of advanced hospital infrastructure and the availability of skilled healthcare professionals have further increased market growth. Europe is paying more and more attention to the rapid diagnosis and treatment of cancer, changing lifestyles, occupying a second place in the market. The Asia Pacific region is the fastest growing market as there are more developing countries in the region, such as India and China. These countries are encouraging the development of health care. In addition, increasing the number of cancers in patients in developing countries will directly increase the demand for various diagnostic and therapeutic approaches, which in turn will drive market growth. The Middle East and Africa are expected to have the smallest market share due to the low availability of medical facilities and the low growth in the medical sector. 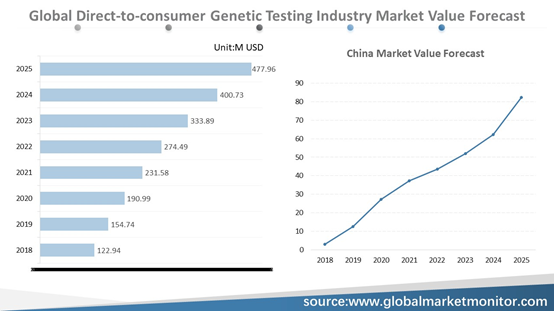 The growth of the direct-to-consumer genetic testing market is mainly driven by market demand. With the development of the economy, the improvement of international medical and health standards, the growing market demand will drive the growth prospects of the global direct-to-consumer genetic testing market. However, fluctuations in raw material prices, trade protection policies and strict certification applications in some countries can be obstacles for the industry.

Although direct-to-consumer genetic testing has good prospects, especially in emerging countries, new entrants without industrial chain advantages and accurate positioning of downstream market segments should not enter the direct-to-consumer genetic testing industry. In the future, manufacturers should step up their research and development efforts, apply for certification in different regions, improve their productivity and create competitive advantages, such as providing high-performance products. In addition, enterprises in this industry can explore vast emerging markets, such as China, India, Southeast Asia, South America and other populous regions. With the development of economy and local enterprises and the continuous reform of medical insurance system, the demand for direct consumer-oriented genetic testing will increase and the market potential will be great.