Analysis of the Status Quo of the Yoga and Meditation Accessories Industry: the Market is Gradually Shifting from Europe and the United States to Asia

Yoga and meditation accessories by type can be divided into cushion, yoga ball, apparel, mat, straps and bricks: A Meditation or a yoga cushion is a large cushion used to support the body in a comfortable seated position while meditating. Balls that are used in the art of yoga to bounce and stretch on. Yoga Apparel are clothing items specifically created for use while practicing yoga. They are highly flexible and comfortable clothing that stretch and adapt to the forms of users. Yoga mats are specially fabricated mats used as an aid during the practice of hatha yoga to prevent hands and feet slipping during asana practice. They are also commonly known as non-slip mats, non-skid mats or sticky mats. Yoga straps are made of non-elastic cotton or nylon and come in a variety of colors. One of the most common uses for a yoga strap is to help get into and maintain challenging poses that might otherwise be out of reach. A yoga brick is a rectangular shaped block made from a dense foam. It is used as a prop in yoga asana practice. 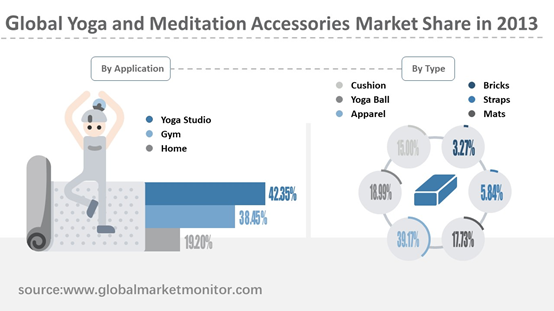 Yoga and meditation activities can be done in yoga studios and gyms, or even at home. A yoga studio is a room, building or other place where yoga classes and instruction take place. It can be as simple as a single room or as complex as a structure with multiple classrooms with built-in props and heated humidified rooms for Hot yoga. There is also a special area for yoga practice and a yoga or meditation class in a big gym. Since yoga and meditation do not require many professional instruments, people can also do some simple yoga exercises and meditation activities at home.

Yoga and meditation accessories companies are mainly from North America and the Asia-Pacific region. The top three companies are Lululemon Athletica, Gaiam and Manduka, with market share of 19.13 percent, 9.71 percent and 6.15 percent, respectively, in 2017, for a combined global market share of 34.99 percent.

As can be seen from the chart of yoga and meditation accessories market share by region in 2013, North America, Europe, Asia Pacific, South America, Middle East and Africa accounted for 24.83%, 27.35%, 33.15%, 5.24% and 9.42%, respectively. The Asia-Pacific region is the largest market by revenue, with Europe ranking second. By 2017, the market share of the Asia-Pacific region and South America region increased to 33.52% and 5.39%. It is mainly the rising per capita income and living standards of people in emerging economies such as China, India and Colombia that have led to increased demand. 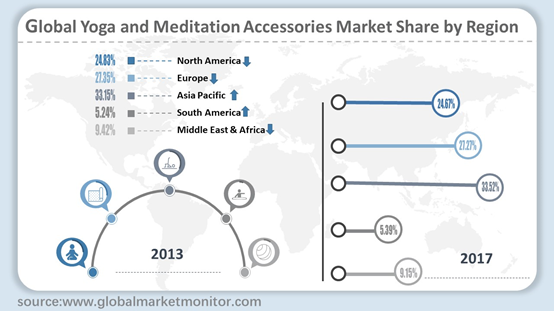 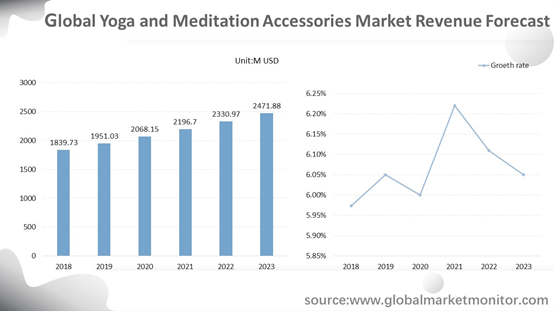 In recent years, with the development of global economy and technology, the improvement of human living standards, the transformation and upgrading of consumption concepts, and booming health-related industries such as yoga and meditation, high purchasing power has driven the expanding demand of this industry. However, yoga and meditation accessories are mostly made of PVC materials, some of which contain heavy metals, which not only pollute the environment, but also do great harm to the human body. In addition, the low-end overcapacity of the industry will also hinder its development.

It is predicted that market for yoga and meditation accessories is expected to continue to expand everywhere. The Asia-Pacific market will play an important role in driving the development of the global market, especially thanks to the rapid growth of China, India and Southeast Asian countries, which gradually realize the role of fitness and is expected to become a major driving force for the industry growth in the future. China market sales volume reached 4543.2 kg in 2013 and is expected to reach 6573.7 kg in 2018. North America has had a significant market position in the past few years and is expected to maintain steady development in the future, especially in the United States. Changes in the United States will have a significant impact on the development of yoga accessories worldwide.

Enterprises in this industry should keep innovating, produce high-performance products, seize the opportunity of huge demand in emerging markets, explore overseas markets, and move toward integrated online and offline services. Only in this way can they gain advantages in the increasingly fierce competition, occupy a higher market share and win a broader market. At the same time, they also need to be vigilant about the growing competitiveness of alternative products emerging in emerging countries, as well as the impact of regional development imbalance.