Human milk oligosaccharides are sugar molecules, part of the oligosaccharides group, which can be found in high concentrations of 0.35-0.88 oz./L exclusively in human breast milk. They form the third most abundant solid component of human milk after lactose and fat. Human milk oligosaccharides (HMOs) are a family of structurally diverse unconjugated glycan that are found in and unique to human breast milk, despite not actually being digestible by human infants. HMOs not only function as a prebiotic helping to establish commensal bacteria, but also function as anti-adhesives that help prevent the attachment of microbial pathogens to mucosal surfaces.

Human milk oligosaccharides can be used as food supplements. A food supplement is defined in EU law as any food the purpose of which is to supplement the normal diet and which is a concentrated source of a vitamin or mineral or other substance with a nutritional or physiological effect, alone or in combination and is sold in dose form. Human milk oligosaccharides can also be used as functional food and beverages. Functional foods and beverages are products with ingredients that are added for specific health benefits that are beyond basic nutrition, intended to convey a health benefit. In addition, human milk oligosaccharides are often found in infant formula, which is a manufactured food designed and marketed for feeding to babies and infants under 12 months of age, usually prepared for bottle-feeding or cup-feeding from powder (mixed with water) or liquid (with or without additional water).

Human milk oligosaccharides companies are mainly from USA and Europe; the industry concentrate rate is very dispersed. The top three companies are Elicityl SA, ZuChem, Dextra Laboratories, with the revenue market share of 19.98%, 17.63% and 13.60% in 2017.

In the cost structure of human milk oligosaccharide production, raw materials and technology accounted for 52.42% and 25.67%, respectively, while equipment and labor cost only accounted for 9.82% and 7.52%. The technology used to make human milk oligosaccharides is very complicated and expensive, so high production costs are considered to be a major limiting factor in the human milk oligosaccharide market. Due to the low availability of the donor group, it cannot be directly synthesized by human milk. Various manufacturers are working to develop technologies for producing products through synthetic and enzymatic methods. However, synthetic and enzymatic methods require high resources and capital to produce the final product, which poses a major threat to market growth. 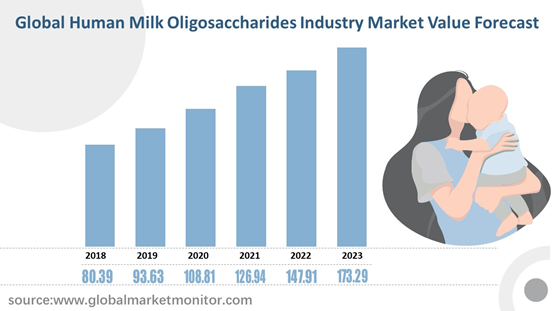 In recent years, functional foods and beverages dominated by dairy products accounted for more than 15% of global sales for there is a high demand for functional foods and beverages with prebiotic properties. Human milk oligosaccharides not only provide prebiotic effects, but also stimulate the nerve health of the human body. The changing lifestyles of the younger generation and the aging of the population are encouraging people to move towards a healthy lifestyle. With the increasing application of human milk oligosaccharides and technological advancement, people like to add supplements to their food to enhance their immunity to healthy living in order to stay healthy.

In addition, the demand for HMOs in infant formula is increasing due to its potential benefits, such as enhanced immunity, good nutrition, feeding of beneficial bacteria in the intestines. The use of human milk oligosaccharides in infant formulas a trend. more and more attention has been paid to the development of cost-effective production technologies, which have opened the way for innovation in the field of human milk oligosaccharides, which has great room for improvement and innovation, as there is no such market on the market so far. As a result, manufacturers can gain a competitive advantage in the market through innovation and technological advancement.

With the development of economy, progress of technology, improvement of raw materials, increased demand of downstream industry, more cost-effective and high performance human milk oligosaccharides increased. Further, inclination towards advanced technology of manufacturer are some dynamic factors which are expected to be driving the growth of global human milk oligosaccharides market in near future.

Gantry /Cartesian Robots are Conducive to Improving Production Efficiency, With a CAGR of Over 12%