Planters in Developing Countries Have Great Potential, Which is Conducive to Promoting the Development of Agricultural Mechanization

A planter is a farm implement. It is connected to the tractor with a drawbar or a three-point hitch to lay the (plants) seeds down in rows throughout a field. Planters have always played an important role in crop planting for they are convenient and fast. In recent years, with the rapid development of economy, the rise of equipment rental business and the continuous development of planting joint operations, the market demand of planters has been expanding. 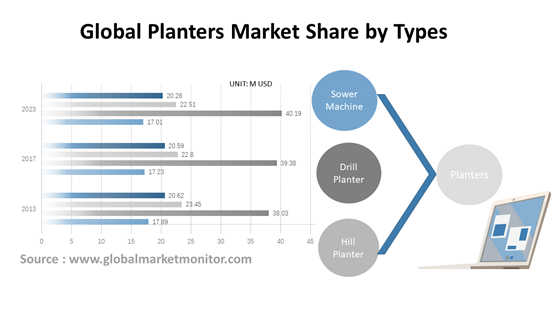 Planters can be divided into three types: sower machine, drill planter and hill planter. A sower machine consists of a seed box and a spreading wheel. Seeds drop from the seed box to the spreading wheel and are broadcast with 8 to 12 meters range along the tangential direction under the action of centrifugal force. A drill planter is mainly used for seeding of small grains such as cereals, vegetables, pastures, etc. During operation, the seed wheel is driven by the traveling wheel to rotate the seeds. The seed from the seed box is discharged into the seeding tube according to the required seeding amount, and is dropped into the opened groove through the opener, and then is pressed by the earth covering device. According to a certain row spacing and hole distance, the seeds in a hill planter will be planted by planting holes with single fine sowing or multiple sowing. It is mainly used for corn, cotton, sugar beet, sunflower, beans and other cultivators. Each seeder can complete the whole process of trenching, seeding, earth covering, and suppression. In addition, planers such as precision planter, combined planter and dibble planter are also put into use.

At present, the drill plant is the most widely used in planters industry, and its market share reached nearly 39.38% in 2017. We predict that the market share of drill machines will exceed 40% by 2022. 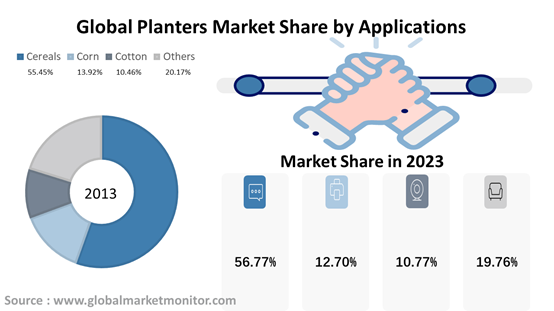 Planters are mainly applied to three major fields. The first sowing for cereals. The second is corn planting. Corn planter has the advantages of uniform seeding, consistent depth, stable row spacing, good earth covering, saving seeds, and high working efficiency. Third, it is used for cotton planting. Due to the large demand and wide distribution of cereals, its market share is as high as more than half. 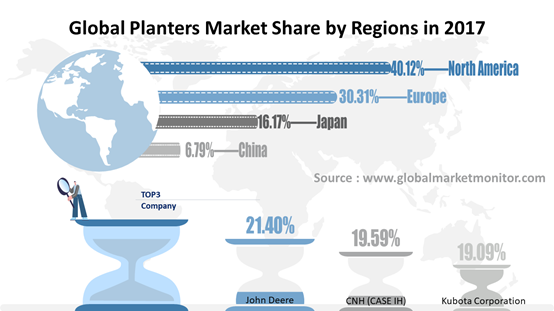 From the figure of global planters market share by regions in 2017, it can be seen that North America accounts for 40.12%, Europe accounts for 30.31%, Japan accounts for 16.17%, followed by China, accounting for 6.79%. It can be seen that the three places with the greatest demand for planters at present are developed countries such as North America, Europe and Japan. There are all over large agricultural countries in these areas, with huge consumer markets, technological and market advantages, multi-channel supply chains and mature industrial chains. As the most populous country in the world, China is a big country in agriculture, production and consumption. In recent years, with the continuous progress of economy and technology, the demand for its planters is also increasing day by day.

The global market of planter is generally in a mature stage, however, the market conditions in various regions vary widely. In European and American countries, the production technology, management, and marketing of planter industry are all mature, as a result the planter market in these area is in a mature and stable period. However, in developing countries such as China, India, and Brazil, due to population growth and rapid economic development, the planter industry in these countries stays in the growth stage. Global planter manufacturers are mainly concentrated in the United States, China, Germany, Italy, and other countries such as India, France, Brazil and Canada also occupy a certain market share. Finally，the Asia-Pacific and Latin American regions has great market potential.

Planter companies are mainly from Europe North America and Japan; the industry concentrate rate is relatively high. The top three companies are John Deere, CNH (CASE IH), Kubota Corporation, with the revenue market share of 21.40%, 19.59%, and 19.05% in 2017.

The Demand for Planters Continues to Increase, with the Vast Market

In developing market such as China and India, with their development of economy, inventory equipment update requirements, investment in agriculture industry, demographic dividend advantage, many local businesses emerged to the market, updating their technology and keep on product innovation, which increased the penetration of more productive, cost-effective and fuel-efficient planters.

In developed market such as North America and Europe, they have more international companies, good channels, highly market maturity, a highly competent management team, technology and finance advantages, keep on innovation, prominent market participants invest heavily in R&D, with introduction of new technologies to their products, fierce competition, all of which make a growing market demand for planters

For the future development of planters, manufacturers can choose to develop in emerging countries such as China and India. They are the most populous countries in the world with low modernization level of agricultural machinery. With the development of its industrialization, the planters market has great market potential. Manufacturers also tend to improve machine productivity to create competitive advantages while developing rental business, such as field tuning, giving users more direct control over performance parameters, increasing operator feedback, and achieving higher machine performance at an effective price point. 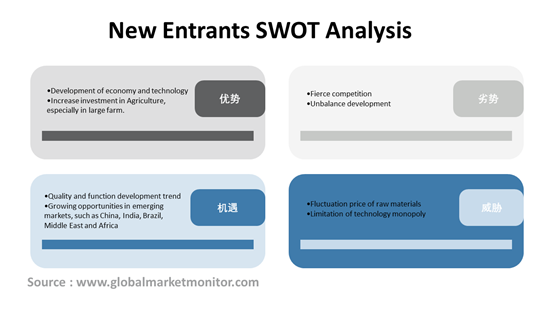 Generally speaking, from a global perspective, the planting industry is growing and the market demand for planters is huge. Although sales of planter brought some opportunities, especially in the emerging countries, the study group recommends the new entrants who has not industry chain advantage and accurate positioning of the downstream segments do not enter into the planter field. What is more, the company in this industry should pay attention to their R&D, keep on launching new product, keep on innovation and improving services, then they may get the competition advantage, and get a bigger market share.

At the same time, we should also be alert to the market threat caused by the unbalanced development and the decrease of global cultivated land area year by year. There are many market advantages in developed countries, while the lack of technology and talents in developing regions leads to uneven development. Global land use is constantly changing, which is mainly manifested in the expansion of urban areas and infrastructure at the cost of agricultural land, and the expansion of cultivated land and forests at the cost of grassland and tropical and subtropical steppe.