Bone Morphogenetic Protein (BMP) is a group of highly conserved functional proteins with similar structure, belonging to the TGF-β family.  In 1889, Senn used demineralized bone for the first time to repair inflammatory bone defects in humans and dogs, proving that demineralized bovine bone could be used to treat osteomyelitis. In 1931, Huggins discovered that the epidermis of the urinary tract could induce new bone formation by ectopic position and reported the experimental process of bone induction for the first time. In 1945, Lacroix extracted Osteoblast from bone, which can induce rabbit muscle osteogenesis, and proposed the hypothesis of bone induction and named it as osteogenic protein. In 1965, Urist found that muscle mesenchymal cells could be transformed into bone system cells by injecting decalcified bone matrix gelatin into muscle, resulting in ectopic osteogenesis. Urist suggested that the decalculated bone may contain an inducer that induces the transformation of mesenchymal cells swimming around blood vessels into irreversible osteoid cells that produce cartilage and bone tissue in bone and beyond. The inducer is bone morphogenetic protein. 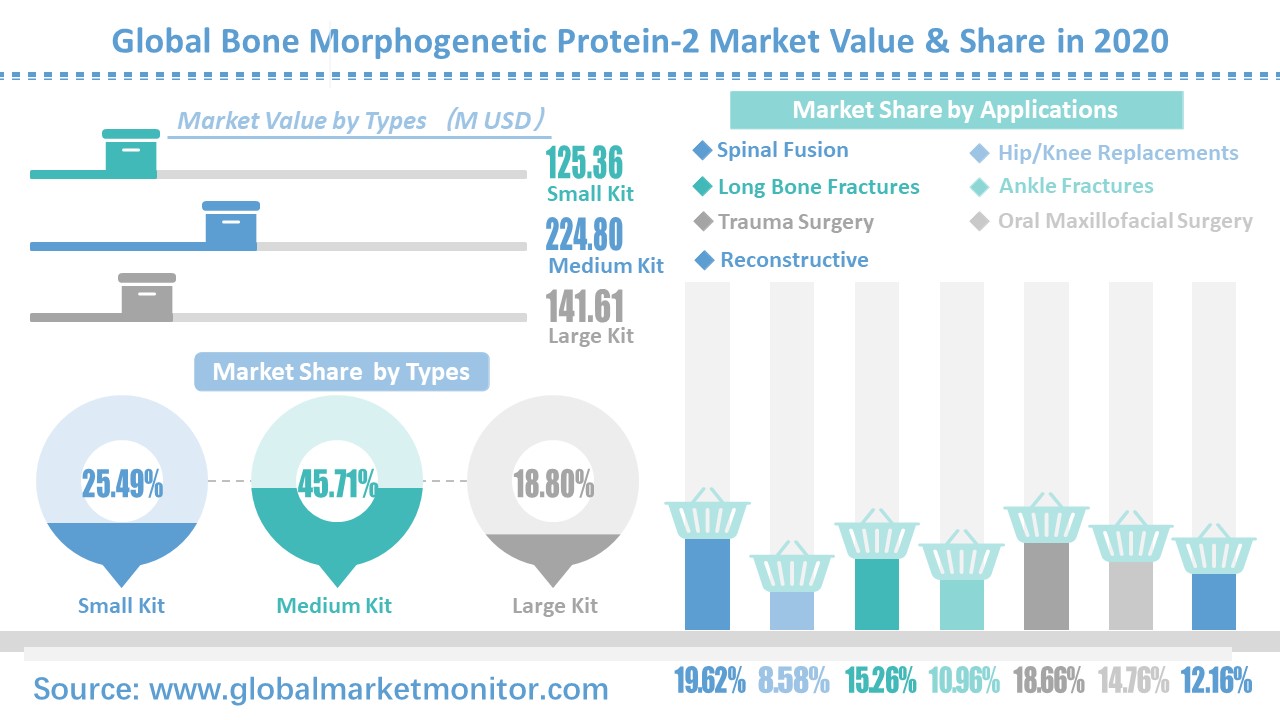 With the development of molecular biology and genetic engineering, Wozney et al. first carried out cDNA cloning of BMP in 1988. They cloned cDNA of HBMP-1, BMP-2A (BMP-2), BMP-2B (BMP-4) and BMP-3 using recombinant DNA technology. And expressed in eukaryotic and prokaryotic cells of Escherichia coli. In 1990, Celeste et al. reported the cloning of BMP-5, BMP-6, and BMP-7, and suggested that the cloned BMP-1, BMP-2, BMP-3, BMP-4, BMP-5, BMP-6, and BMP-7 should be named respectively.

BMP can stimulate DNA synthesis and cell replication, thereby promoting the directed differentiation of mesenchymal cells into osteoblasts. It is also the main factor inducing bone and cartilage formation in vivo, and is expressed in limb growth, endochondral ossification, early fracture, cartilage repair, and plays an important role in bone embryonic development and regeneration repair. Now there are 43 members of BMP family, widely existing in pig, cow, sheep, rabbit, mouse and human embryo, blood cell, kidney, spleen and other tissues, and there is a high homology between different species. BMP not only participates in the regulation of bone, but also plays a role in the development of fat, kidney, liver, bone and nervous system. 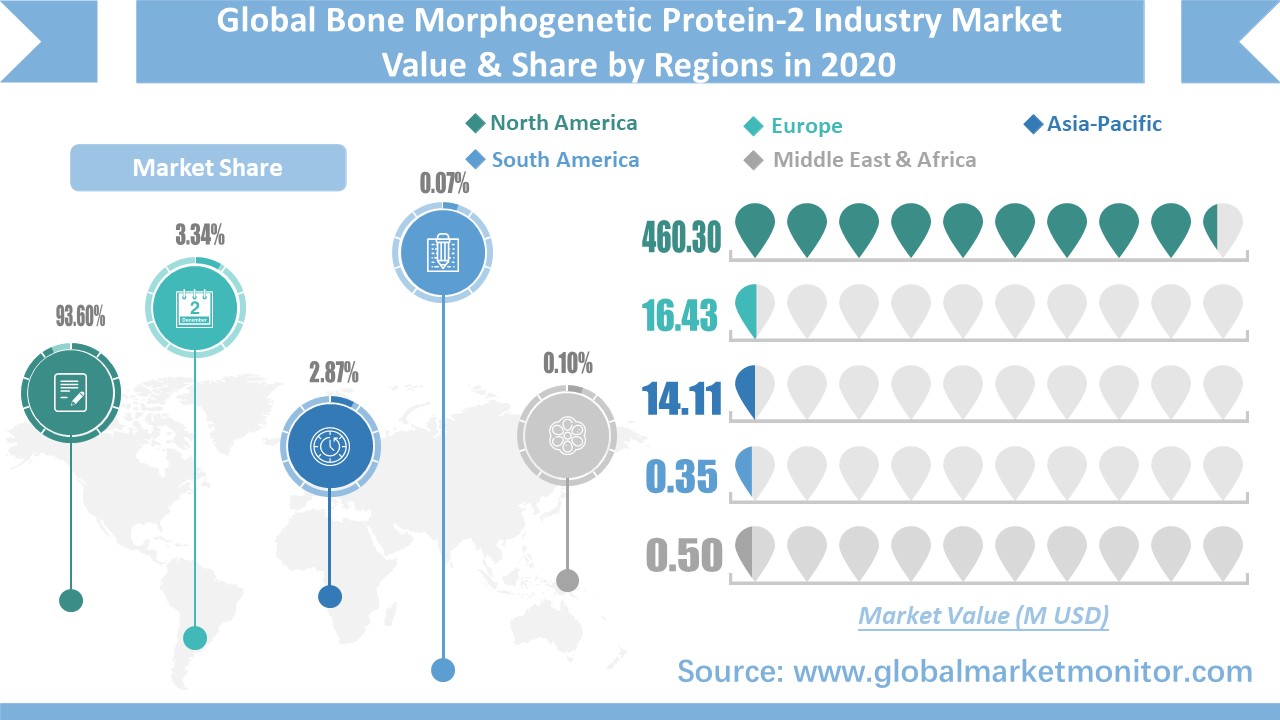 Research shows that North America is the largest revenue market in this industry.  In 2020, the total revenue of the industry in North America was $460.30 million, with a market share of 93.60%, indicating a high degree of geographic concentration in the global bone morph protein industry.  However, according to our forecast, this situation will slowly break down in the coming years, with the North American market gradually decreasing over the forecast year, while the market share of Asia-Pacific region will gradually increaseThe market share of North America in the industry is expected to decline to 76.04% by 2026, while Asia-Pacific market share will rise to 17.02%. Investment in a certain region mainly needs to consider whether there is a large market potential.  However, since many regions have very strict regulations on product markets, we recommend starting with regions with market access. The legal supervision of BMP-2 products in the American market is relatively perfect, and the market awareness is relatively high. Therefore, investment in the American market can be considered. Meanwhile, over the past few years, the economic development of the Asia-Pacific region, the growth of healthcare affordability and the improvement of healthcare facilities represent the region\'s future development potential.  Therefore, we also recommend considering investment in this area.

According to our research, the total market value of the global bone morphogenetic protein industry was $501.29 million in 2015. The growth of the industry is not stable and the growth rate fluctuates between 2015 and 2020. In 2020, the industry market value was $491.78 million, slightly affected by the pandemic. Based on this, we performed a series of functional calculations and derived the data for the next 6 years using a scientific model. Finally, we predicted that the global market value of bone morphogenetic protein industry will reach $661.38 million by 2026. 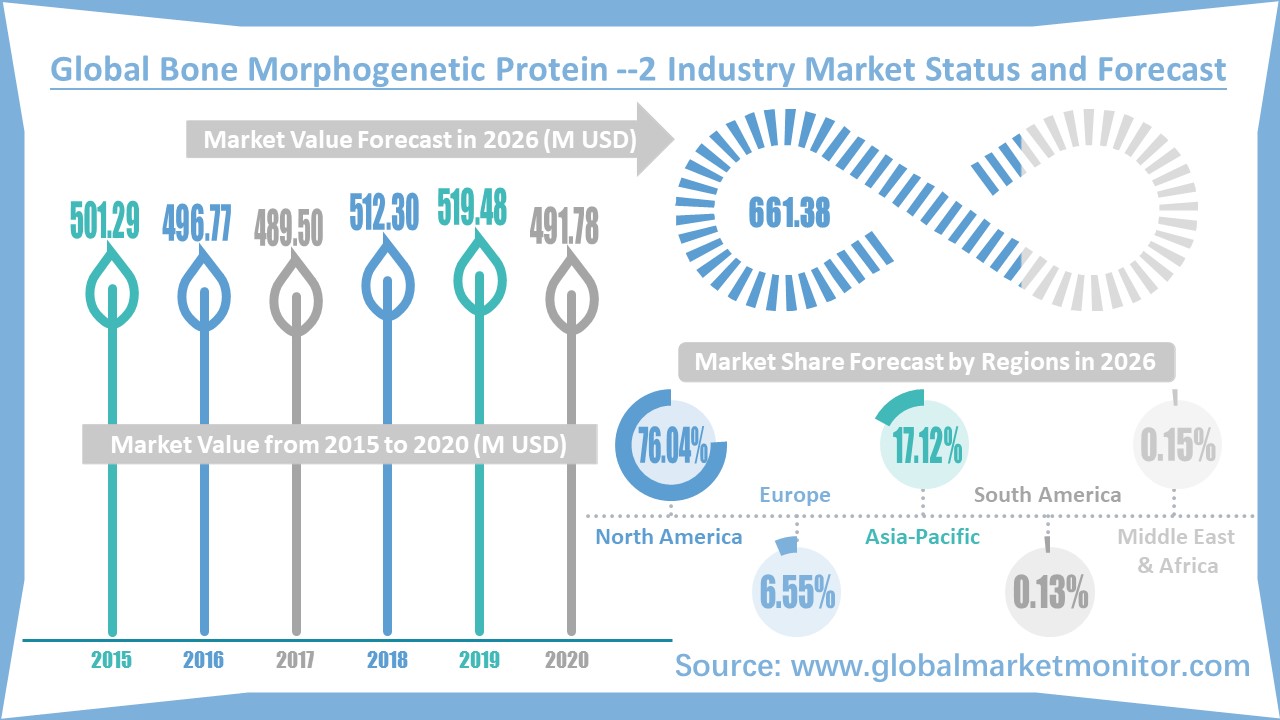 In recent years, aging, sports-related injuries and sedentary lifestyles in many regions have led to an increase in spinal fusion and joint reconstruction procedures. Local growth factors play a leading role in the regulation of bone tissue formation, especially BMP-2, as a growth factor, can independently induce the differentiation of mesenchymal cells into bone tissue, and is a key regulatory factor in the process of bone tissue formation.  In addition, BMP-2 is of great help in patients undergoing spinal perfusion therapy, reducing pain, reducing dependence on screws and spinal rods, and increasing the rate of spinal fusion. Market participants are committed to product innovation and product line expansion, and the application scope will be more extensive in the future.  On the other hand, although BMP-2 is widely used in the United States and Europe, it is less used in other emerging markets. With the improvement of market awareness of BMP-2, it is expected to gain more development opportunities in emerging markets.

However, currently, the use of BMP-2 is subject to strict regulatory restrictions and will face similar problems in the future. In addition, controversy over side effects of BMP-2 and negative press related to the product will also hinder market expansion to some extent.