Lacrosse originated in North America as a traditional game played by the native Indian Bagatawe, mainly as a warrior exercise and for ceremonial purposes. Lacrosse is said to be the fastest ball game in the world. It is a game for children in which the ball is controlled by a net at the top of the stick. However, this team game, which combines football, basketball and hockey, is an extremely fast game due to the leverage principle when the players are attacking and defending at the same time, and requires a lot of coordination, basic skills and teamwork. This combination of collective energy, speed and skill is certainly no less attractive than any of the advanced popular sports.

Lacrosse equipment can be purchased through the following channels; sporting goods retailers, department stores, hypermarkets and supermarkets, and online retail. A complete kit includes the following products.Lacrosse, which is a solid rubber ball used in lacrosse along with a lacrosse stick. Men\'s lacrosse balls are usually white and women\'s lacrosse balls are yellow but also come in a variety of colours. Lacrosse stick which players use to catch the ball and also to hit the opposing player\'s stick to make them drop the ball. The Lacrosse Glove is a thickly padded protective glove worn by men\'s lacrosse players. The glove is designed to protect the player\'s hands, wrists and forearms from checks or legal defensive hits common in the sport. The lacrosse helmet is a protective helmet that is primarily used in men\'s lacrosse. Helmets are required for all levels of organised men\'s lacrosse, while only the goalkeeper needs a helmet for women\'s lacrosse. Arm guards help players to absorb impact, reduce elbow impact and improve safety when playing lacrosse. 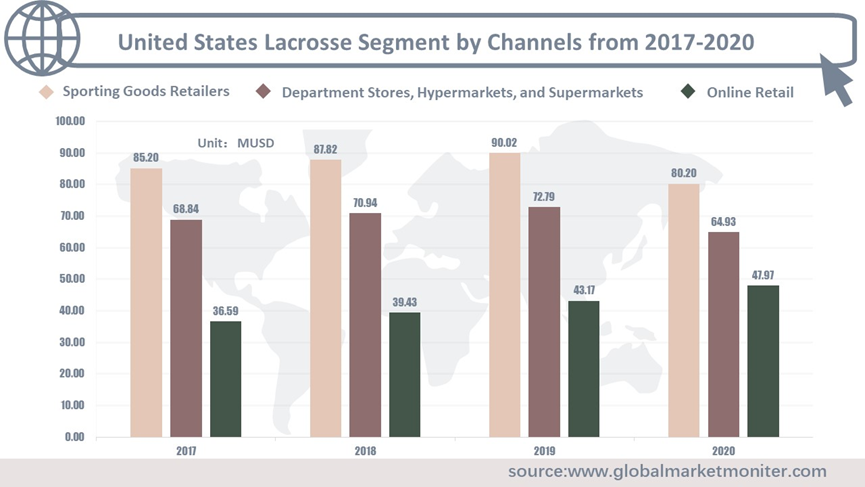 According to our research, the United States Lacrosse market has a total sales value of 177.22 M USD back in 2015, and increased to 193.10 M USD in 2020. We made a series of functional calculation and deduced the past 5 year’s data with scientific model. Finally, we made the prediction that the value of Lacrosse markets can be 251.12 M USD by 2027. The CAGR of Lacrosse is 2.51% from 2019 to 2027. Northeast United States was the largest revenue market with a market share of 30.13% in 2015 and 30.36% in 2020 with an increase of 0.23%. South United States ranked the second market with the market share of 27.45% in 2019. Lacrosse companies are mainly from the United States; the industry concentrate rate is moderate. The top three companies are Warrior Sports, Nike and STX with the revenue market share of 14.75%, 14.22% and 10.28% in 2019. The United States Lacrosse market is expected to witness a mild growth during the forecast period because of the growing participation at high school and collegiate level. The other factor that is driving the growth of the Lacrosse market is branding and product development. 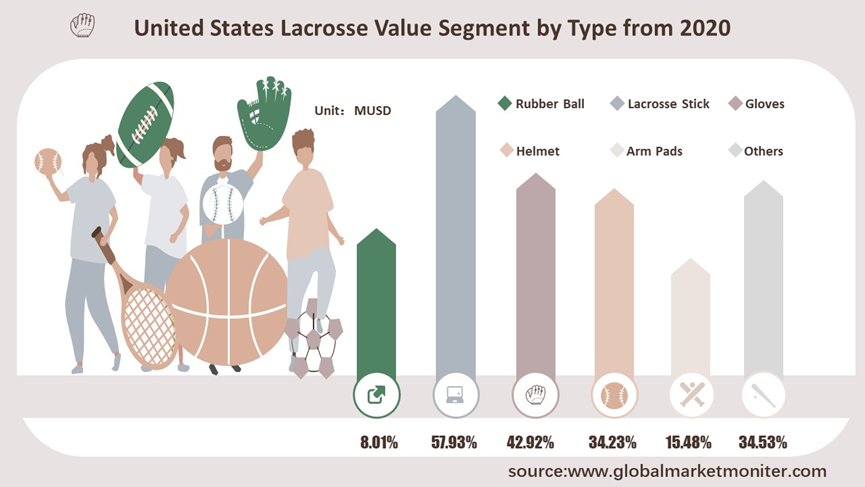 Since the outbreak of the COVID-19 virus in December 2019, the disease has spread to nearly 100 countries around the world, and the World Health Organization has declared it an emergency public health event. The COVID-19 epidemic is infected with a large number of people, and its spread and scope far exceed SARS. At present, the number of confirmed cases in Worldwide has exceeded 27 million. Different industries are affected differently by the epidemic situation. And the COVID-19 epidemic has severely hit the global economy. The World Bank predicts that the global GDP (gross domestic product) will fall by 5.2% in 2020, which is the largest drop since the Second World War.

The impact of the epidemic on the Lacrosse industry will involve all major links and all entities in the industry chain. In order to avoid large-scale population movements and gatherings, various countries have adopted prevention and control measures such as home isolation. More and more cities are entering the first-level response state, strictly isolating measures, strictly prohibiting vehicle entry and exit, strictly controlling the flow of personnel, and strictly preventing the spread of the epidemic. This makes it impossible for non-local employees to return or arrive immediately, the number of employees is insufficient, and normal commuting is also severely frustrated, resulting in a large-scale shutdown of production. The existing raw and auxiliary material reserves cannot meet the needs of normal production, and the raw material inventory of most companies cannot maintain production. The industry\'s start-up load dropped again and again, and market sales dropped sharply. Under the background of the current epidemic situation, both supply and demand will be suppressed, but the impact on consumption will be significantly greater than the supply side. Therefore, the overall weak supply and demand pattern is difficult to reverse. Manufactures has no intention to reduce production for the time being, and consumption is sluggish. Affected by the sluggish demand, manufactures have reduced the output of products.

In addition, the epidemic has also caused a great impact on Lacrosse companies, with production delays and order cancellations. Many lacrosse manufacturers have been unable to fully resume normal operations due to insufficient orders. In order to fight the epidemic, some lacrosse companies have turned to produce medical equipment such as masks, ventilators, goggles and other necessary medical supplies to meet the needs of the epidemic. This will not be conducive to the further development of the lacrosse market to a certain extent. From the perspective of the consumer side, the spread of the epidemic has a significantly greater impact on the consumer side than on the supply side. To prevent and control the epidemic, many countries have closed cities, borders, and ports, and the economy is in a state of suspension. Take the Lacrosse as an example. In order to fight the spread of the COVID-19 epidemic, countries generally adopt measures such as suspension of work and production and home isolation. Because the epidemic will inevitably have a huge impact on the global economy. The economic downturn will reduce the income of most households. Many companies even consider layoffs due to funding issues. The wages of employees have fallen, and people’s disposable income has decreased. Even if people buy lacrosse goods to satisfy their children’s wishes, they will also switch to buying cheaper alternatives. Lacrosse are expensive in terms of price. In the context of the global economic downturn, people\'s purchasing power and willingness to consume will decrease. Although the impact of the epidemic on the Lacrosse market in the short term is inevitable, the specific extent of its impact also depends on the effectiveness of the prevention and control of the COVID-19 epidemic. 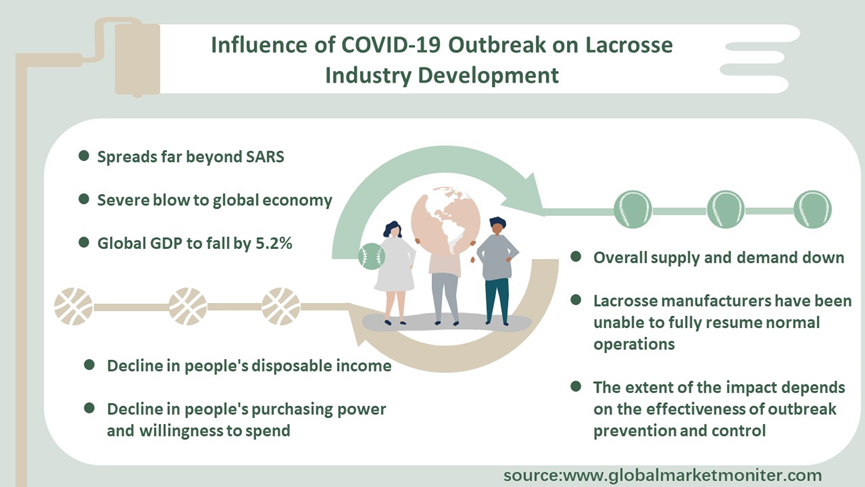