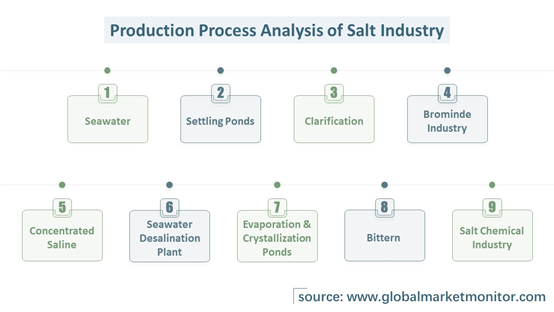 At present, there are four types of salt on the market: solar salt, rock salt, brine salt and vacuum salt. Sun salt is named after its production method. It is produced in large, staggered ponds. People introduce salt water from the Great Salt Lake or San Francisco Bay into these shallow ponds, and then use the sun, wind and time to evaporate, so as to get solar salt. This salt-making method is very simple to save costs to a large extent. Therefore, solar salt has the highest market share among the four types of salt, reaching 47.85% in 2019. The second largest market share is rock salt, also known as mineral salt or rock salt. It is salt mined underground or in caves and exists in the form of crystalline minerals. Vacuum salt refers to a kind of salt prepared by evaporating salt water in an evaporation tank under different "vacuum" conditions. Natural brine exists underground, in salt lakes or sea water, which is an important commercial source of ordinary salt and other salts (such as magnesium and potassium chlorides and sulfates). However, brine mining is difficult and the market is the smallest, with a market share of only 1.79% in 2019. 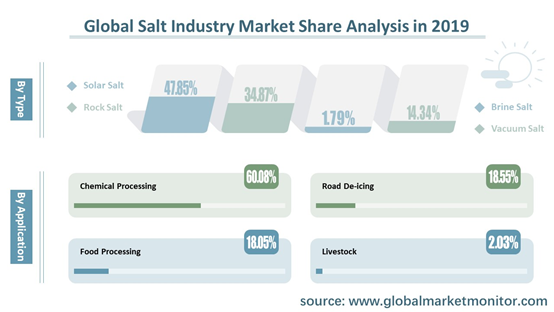 In the chemical industry, salt is a compound composed of a certain number of cations and anions, so the product is electrically neutral and essential for chemical processing. Stone salt is inexpensive with a large supply. Traditionally, it is often mixed with sand and gravel, and then sprinkled on slippery roads by snowplows or dump trucks to achieve the effect of road deicing. Salt is also commonly used as a preservative and flavoring agent to be added to processed foods, such as canned foods, salted foods, preserved foods and snack foods or other convenience foods. Although salt is present in most foods, it is very small in naturally occurring foods such as meat, vegetables, and fruits. In addition, in livestock industry, adding salt to livestock and poultry can help maintain the nutritional balance of livestock and poultry feed, so as to avoid the lack of sufficient chloride.

Prospect Analysis of the Salt Industry in Various Regions

After years of development, the salt industry has matured. Most of the companies in the industry come from Europe, America and the Asia-Pacific. The main companies are K+S AG, Compass Minerals, China National Salt, etc.

The Asia-Pacific region is the salt industry's largest revenue market, with a market share of 46.37% in 2015 and 47.98% by 2020, an increase of 1.61%. As developing countries and coastal countries, China and India’s development of the chemical industry and the food industry has brought about a large demand for salt. Together with the increasing population of the two countries, China and India have become the largest consumers of salt. With the continuous development of economy and industrial technology, the salt industry market in emerging countries is developing rapidly, the industrial chain is gradually improving, the industrial technology is constantly developing, so the market potential is huge. In addition, because of the low labor cost and good industrial foundation in the region, more and more suppliers are moving their production bases to the Asia-Pacific, which will promote market growth in the region. 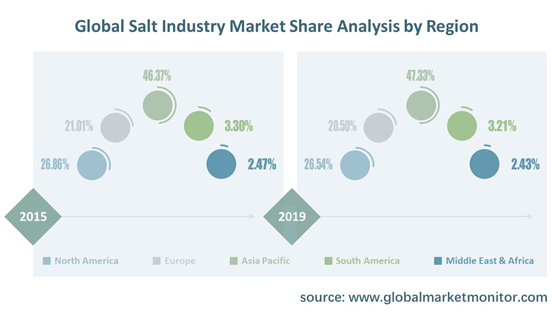 North America and Europe rank second and third, with market share of 26.54% and 20.50% in 2019. Located at higher latitudes, these areas mainly use salt for deicing and delay the formation of ice for a long time. According to research in Wisconsin, the application of salt to snowmelt in the United States is estimated to reduce accidents by 88%. It can be seen that the cold and frosty winters in North America and Europe and other regions of the world have led to an increase in demand for salt, which is expected to promote the development of the salt industry.

COVID-19 Has Little Impact on the Salt Industry, Which Market Demand Will Maintain Steady Growth 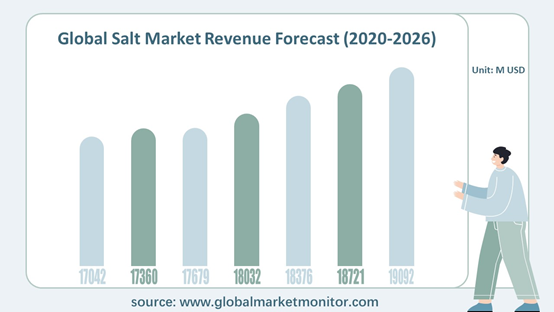 The impact of COVID-19 on the salt industry involves all major links and all entities in the industrial chain. During the epidemic, in order to avoid large-scale population movements and gatherings, countries strictly controlled the movement of people to prevent the spread of the epidemic, which hindered the transportation of raw materials and salt products such as sodium chloride, iodine, and ferric ammonium citrate. In addition, the insufficient number of employees led to a large-scale shutdown. At present, salt chemical companies are working hard to reduce all unnecessary expenses and reduce cash outflows in order to survive.

In the short term, in view of the fact that salt wholesalers have completed most of the sales tasks ahead of schedule during the Spring Festival stocking stage and the state's emergency measures for salt reserves, the epidemic has little impact on salt wholesalers at this stage. In the long run, the increase in raw material and logistics costs, the development of online shopping habits of consumers and distributors, and the difficulty of re-recruiting workers after the epidemic has eased, will affect the operating costs of salt chemical companies. However, due to the staple food nature of table salt, this industry is one of the few industries less affected by the epidemic. Consumers and food processors have always maintained their demand for salt, which is relatively stable throughout the year and will not be affected by large fluctuations in demand.