The Economic Agglomeration Effect of Aviation Industry is Gradually Prominent, and the Market Demand for Pilot Training is Increasing

Pilot training refers to the training of avionics, aviation meteorology, civil aviation English, aviation technical English, flight accident, airport operation, aviation psychology and other theoretical courses for aviation pilots or ordinary trainees.  If the flight stage will also have a more systematic theory from private photography, instrument, commercial photography, to ATP (airline transport license) and a series of theory and practice.  In terms of the type of aircraft used, pilot training can be divided into two categories: rotor and fixed wing.  Among them, fixed-wing aircraft occupy a larger market, with a market revenue share of 75.95% in 2019, while rotors only account for 24.05%.  In terms of different application markets, civil pilot training dominated the market, accounting for 78.38% of the market revenue in 2019, while military only accounted for 21.62%. 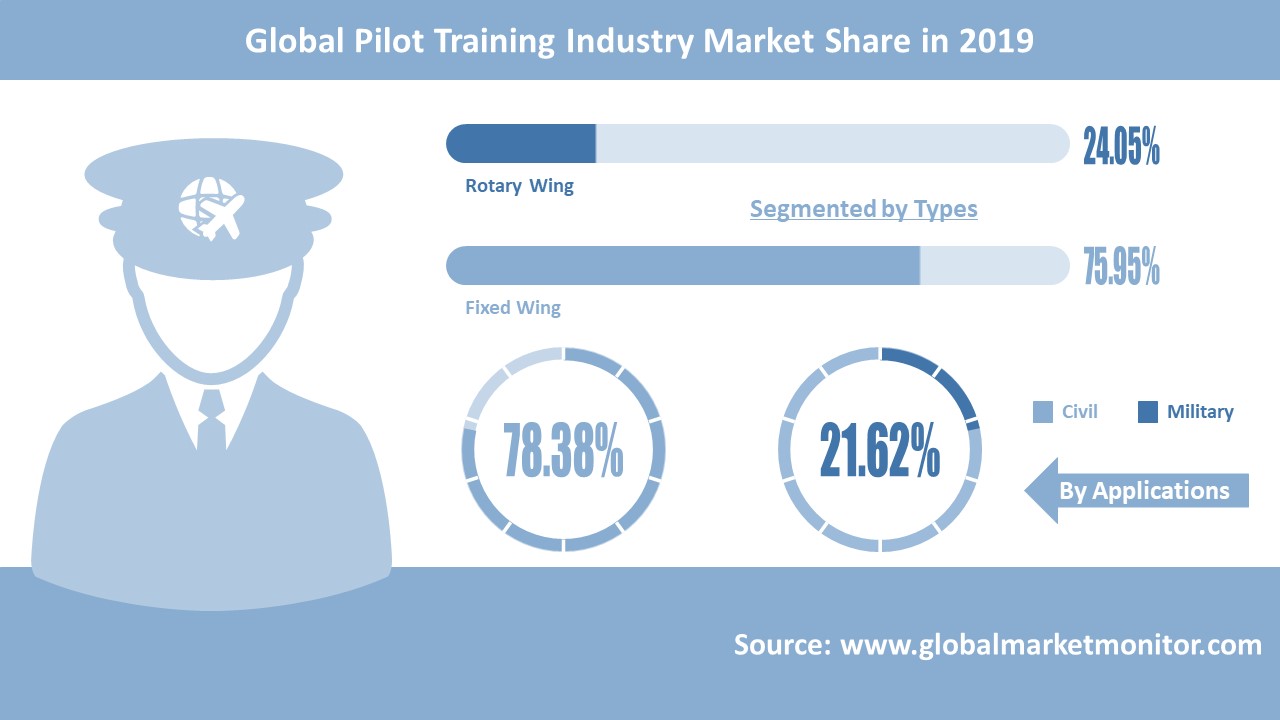 North America and Europe dominate the market, and the Asia-Pacific region has great market potential


The research shows that North America is the largest revenue market for the global pilot training industry. In 2019, the pilot training market in the region reached $1,839.90 million, accounting for 40.17% of the global market share.  Second, Europe ranked second with market revenue of $1398.06 million and 30.53% market share.  Asia-pacific accounted for 22.33% of the global market with a market revenue of $1022.91 million, ranking third.  However, South America and Middle East & Africa are relatively small, accounting for only 3.83% and 3.14% respectively. 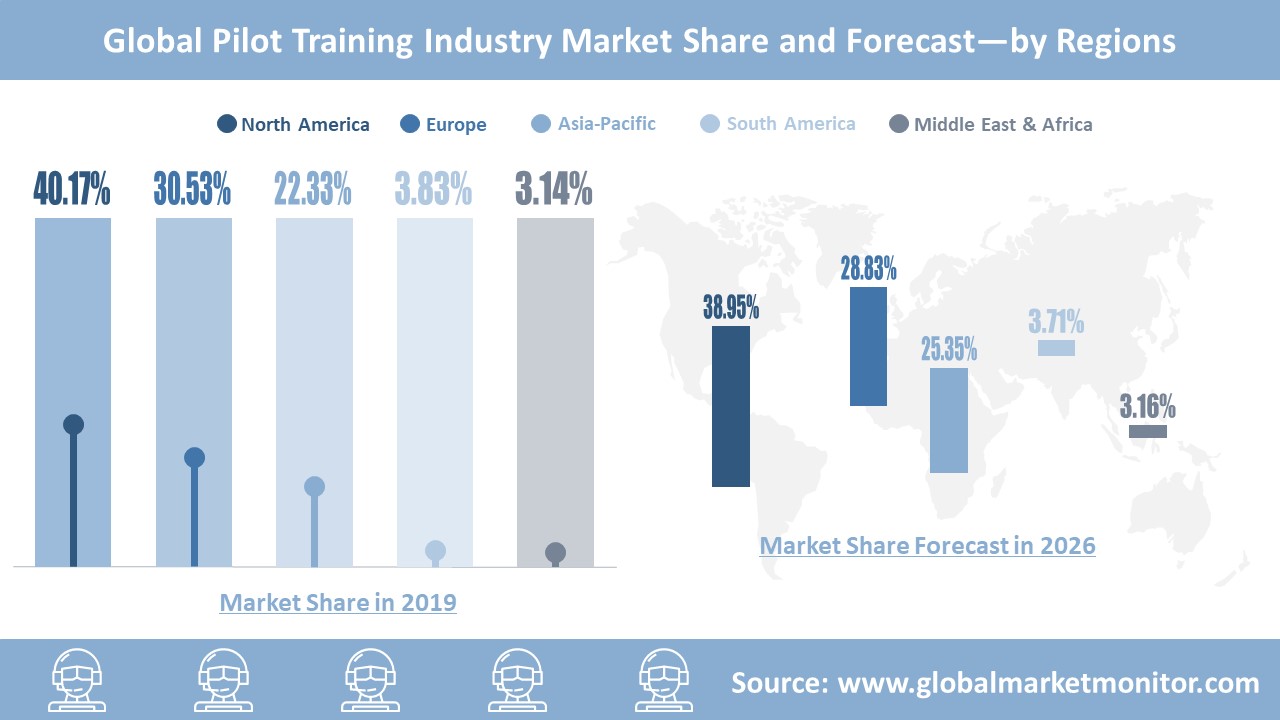 According to the data, the global pilot training industry market revenue in 2015 was $3771.67 million, and has been increasing year by year since then, reaching $4579.94 million by 2019, registering a compound annual growth rate (CAGR) of 4.97% from 2015 to 2019. Based on the data basis and combined with the market environment and development law, we conducted a series of function calculations and deduced the data of the next 7 years with scientific models. Finally, we predict that the market will continue to grow steadily during the forecast period. By 2025, the global pilot training industry market revenue is expected to reach $4945.00 million.  It will surpass $50 million by 2026, with an estimated $5,219.94 million.

In addition, through data analysis and model derivation, we predict that the regional competitive landscape will change during the forecast period: the market shares of North America and Europe will decline during the forecast period, to 38.95% and 28.83% respectively by 2026;The market share of Asia-Pacific region will increase from 22.33% in 2019 to 25.35% in 2027;  In addition, the revenue share of the pilot training market in South America will also decline slightly, while the share of the Middle East & Africa region will increase to some extent.

The impact of the pandemic on the global pilot training industry


According to Johns Hopkins University in the US, the number of confirmed COVID-19 cases worldwide has exceeded 9.6 million and nearly half a million people have died.  The pilot training market has suffered an unexpected slump amid the spread of the COVID-19 pandemic and a sharp drop in aviation demand.  Busy pilots in the past may not fly for weeks or even months.  Take China, which quickly emerged from the impact of the epidemic, for example. According to the statistics of Long Chartered Airlines, during the epidemic period, China\'s domestic flights once dropped to 5,380 flights per day (February 13), which was the same as in 2001 and far from the average of 37,000 flights per day before the epidemic.  In the 40 days before and after the Spring Festival, civil aviation carried 38.39 million passengers, 58.6 percent less than the same period last year.  The global epidemic prevention and control is continuing due to the second outbreak in many European and American countries.  In the short term, it will be difficult for the major airlines to return to their pre-pandemic status and meet the needs of their pilots.  A sharp drop in demand from the most important downstream civil airlines will have a huge negative impact on the midstream training industry.
At present, pilot training is mainly based on experiential offline centralized teaching.  Under the influence of epidemic and other emergencies, it is necessary to find new ideas to ensure the normal development of civil aviation education and training.  In order to ensure the progress of courses, online education becomes a necessary choice, which is also the general trend of the industry.  Online can not only solve the contradiction between work and life, but also greatly improve the learning efficiency through offline centralized learning for pilot training.  Employees can also effectively arrange their study time according to their own work plan, which is no longer limited by location and time.  In addition, online pilot training will also promote the development of civil aviation education and training informatization through data.  The analysis helps the training organizer to dynamically master the training content and the implementation of training, and through the analysis of system data, helps the training organizer to determine the direction of subsequent training work.
The economic agglomeration effect of aviation industry is gradually prominent, and the market demand for pilot training is increasing

In recent years, the economic agglomeration effect of aviation industry is gradually prominent, and the aviation market has huge potential.  With the continuous liberalization of aviation policies and the gradual opening of the low-altitude sector, the demand for general aviation and official pilots will also increase day by day, which will promote the rapid development of pilot training industry.  On the other hand, with the deepening development of economic globalization and the continuous and rapid development of national economy, the world air transport market is developing towards the trend of low cost, which makes the demand for pilot training surge in developing countries.  In addition, with the development of the market, the training methods and models are more flexible than before, but the examination is strictly conducted in accordance with the FAA regulations, which also ensures the long-term stable development of the market.