Under the Background of "Double Carbon", the Global Photovoltaic Tracker (PV) Market Space is Accelerating Release

Photovoltaic tracker, also known as solar tracker, is the power device that keeps the solar panel directly facing the sun at any time, so that the light of the sun shines vertically on the solar panel at any time. Using this device tracker can significantly improve the power generation efficiency of solar photovoltaic modules.
According to the different structure, photovoltaic trackers can be divided into two categories: single axis and double axis.  The single-axis solar PV tracker rotates around its own axis and moves back and forth in a single direction, while the biaxial tracker keeps facing the sun while moving in two different directions.  Of the two types of products, single-axis photovoltaic trackers have a larger market.  In 2019, the global single-axis PV tracker market accounted for 78.67% of the revenue, while the dual-axis PV tracker accounted for only 21.33%.  In terms of application fields, photovoltaic trackers are mainly used in public utilities.  Data show that in 2019, the global PV tracker market revenue in the public utility sector reached $2,688.61 million, accounting for 92.45% of the market share, while the civil and commercial sectors only accounted for 2.22% and 5.33%, respectively. 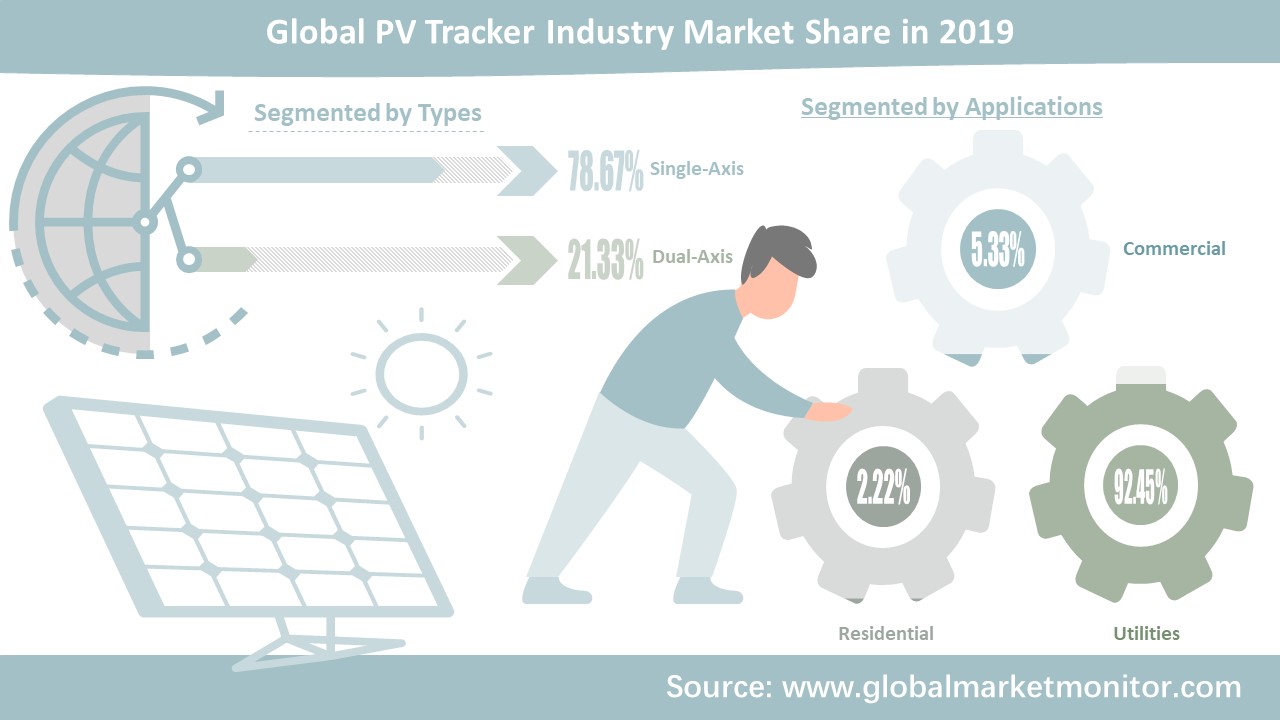 
The research shows that North America is the largest revenue market for the global PV tracker industry. In 2019, the North American PV tracker market revenue was $811.89 million dollars, accounting for 27.92% of the global market share;  Second, the Middle East & Africa market ranked second with 20.80% share and market revenue of $604.97 million.  South America is the third largest market by revenue, accounting for 19.62% of the global PV trackers market with revenues of $570.50 million in 2019.  Europe and Asia Pacific accounted for 18.08% and 13.59%, respectively.
At present, although the PV tracker market in Europe occupies a relatively low share in the world, its market development prospects are considerable. Many countries are committed to vigorously developing the PV industry to help accelerate the realization of the "double carbon" goal.  In early January 2019, the Italian Ministry of Economic Development released a new National Comprehensive Climate and Energy Plan for 2030, which aims to consume 30% of the total energy from renewable sources by 2030 and sets a target of 50GW of PV installed capacity.
In January 2019, the French Ministry of Ecological Transformation released a draft energy development plan for the next 10 years, according to which the installed capacity of renewable energy in France will quadruple from current levels by the end of 2028, with new installations mainly coming from wind and photovoltaic power.  According to the draft plan, France will have four times as much renewable energy capacity by the end of 2028, with new installations coming mainly from wind power and photovoltaic power.

In early 2000, the German Bundestag and Senate passed the Renewable Energy Act. Since then, it has been amended several times and become an important legal basis for the promotion of renewable electricity in Germany, stipulating that renewable energy should account for 35% of Germany\'s electricity supply by 2020, 50% by 2030, 65% by 2040 and 80% by 2050. 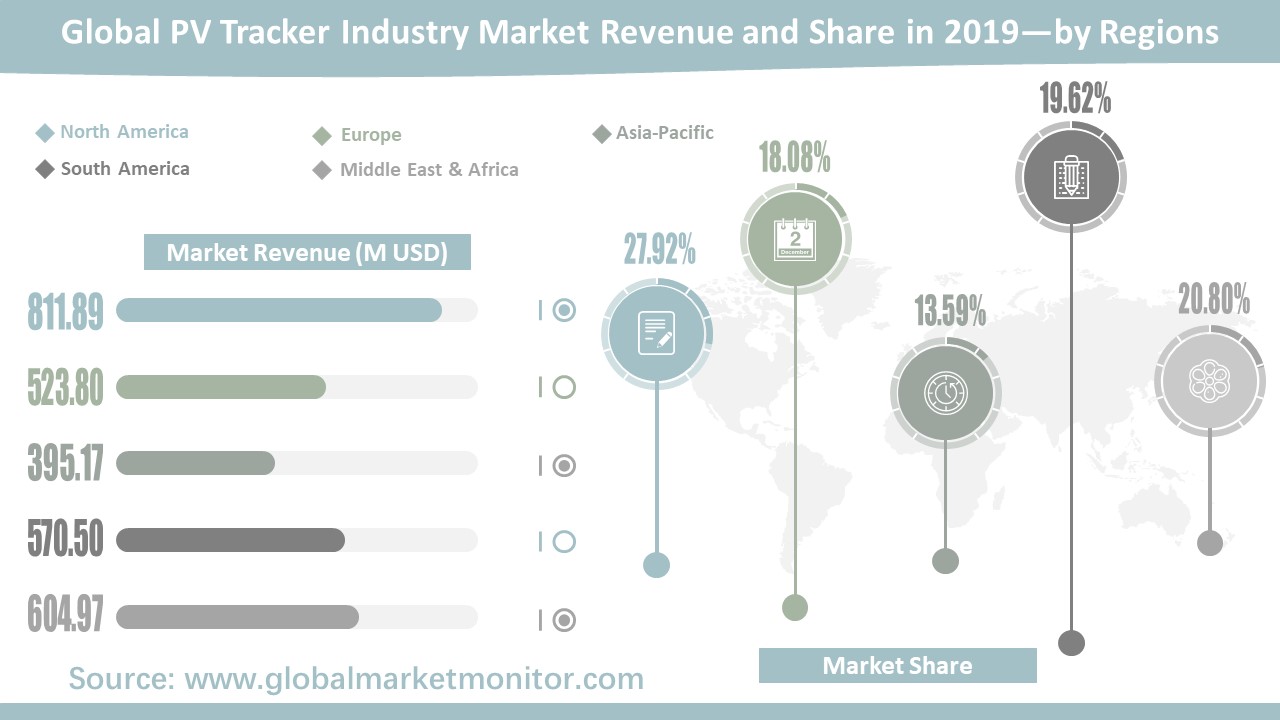 
Data show that the total market revenue of the global PV tracker industry was $699.33 million in 2015, and has since grown rapidly, reaching $2908.32 million in 2019.  Market revenue grew at a compound annual growth rate (CAGR) of 42.80% from 2015 to 2019.  Photovoltaic trackers are widely used in various applications, such as public and non-public solar photovoltaic plants.  Many governments have raised awareness of the benefits and requirements of carbon emission reduction from green energy, and government incentive programs and feed-in tariff subsidies are expected to drive the market in the coming years, which is expected to be one of the major drivers of the sales volume growth in the global PV tracker market.  In addition, large key market players have started to invest a lot of money in this industry, which will also have a positive impact on the global market.  The global PV tracker industry is expected to reach a total market revenue of $23,947.37 million by 2025.
The PV tracking system solves the problem that the fixed bracket hinders the generation of the double-sided module by using the tracking bracket to keep the PV module always facing the sun, allowing sunlight to always shine vertically on the module to maximize the power generation.  When fixed, the back of the module radiates only to the north, but when the module radiates east-west, it gives the factory higher output.  Increased use of double-sided module technology will make trackers and installations more efficient and less costly.  The surge in demand for double-sided modules will further drive the use of PV trackers worldwide.  Two-sided modules typically produce 5-20% more energy under optimal albedo conditions compared to standard single-sided modules.  A team of scientists at the Solar Energy Research Institute in Singapore found that the best way to achieve the lowest LCOE in Solar power projects based on crystal silicon technology is to combine a double-sided panel with a single-axis tracker,  Is the current value proposition for two-sided module manufacturers and tracker manufacturers.  The combination of the double-sided module and the tracking system allows for more full and effective use of northbound radiation.
However, PV trackers are slightly more expensive than fixed trackers due to the technology and moving parts required for operation.  In addition, PV trackers usually require some routine maintenance, so this will cost
more maintenance as well as time.  In addition, the PV tracker requires more site preparation, including additional trench digging for wiring and some additional ramps.  These will become the major hindering factors for the development of the global PV tracker market. 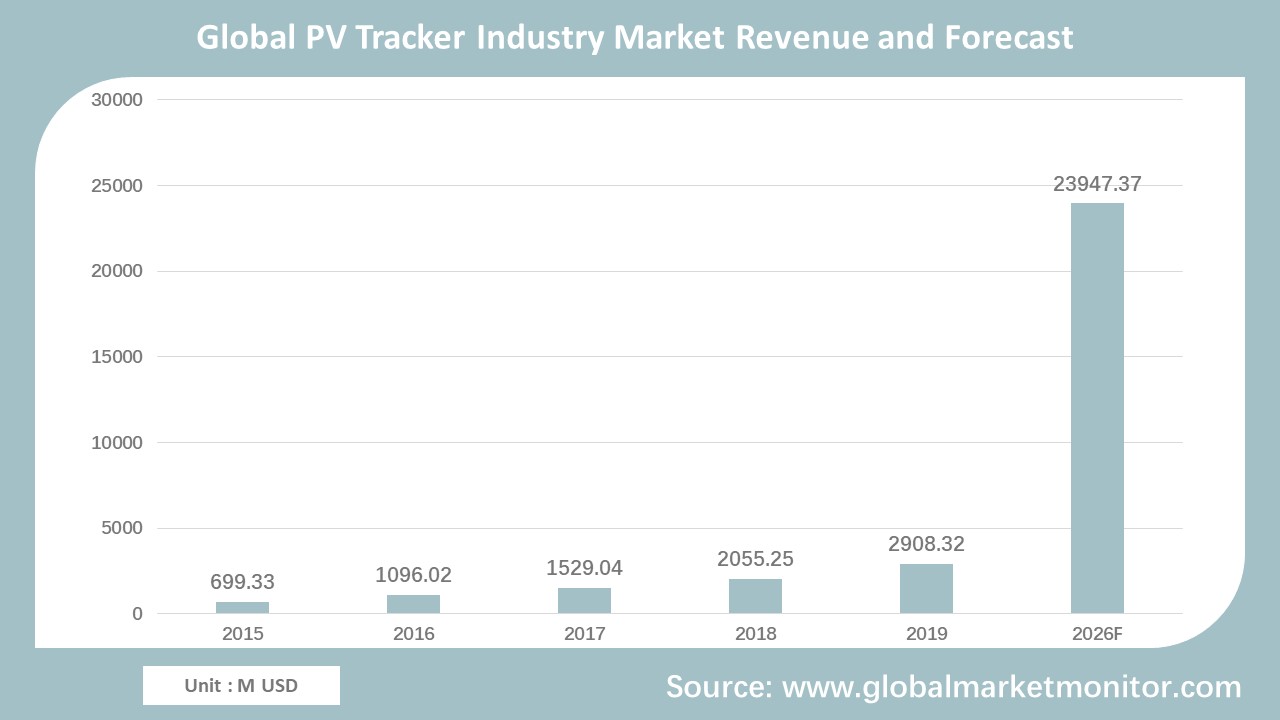