A drone sensor can be defined as a system that is able to determine changes that occur in terms of physical or electrical variations as well as other quantities. The sensor is then able to acknowledge this variation in the drone and act accordingly in order to ensure the proper functioning of the drone. There are various applications by which these drone sensors can be utilized such as in air pressure measurement, collision detection and avoidance, navigation of the drone, data acquisition, motion detection, power monitoring, and more. As the technology behind unmanned air vehicles (UAVs), or drones, continues to improve, the application of these highly versatile devices has expanded to almost every industry. For example, the use of drones has already proven successful in surveying and mapping large areas, inspecting a number of different industries including solar parks and energy plants, acquiring 360° spherical panoramic images for advertising, real estate and construction, monitoring plant and wildlife conservations, and much more. To further improve the sensitivity of drones in capturing specific aspects of some of the aforementioned applications, as well as improve the ability of drones to maneuver around difficult to reach locations, a variety of different sensors have been incorporated into these devices. 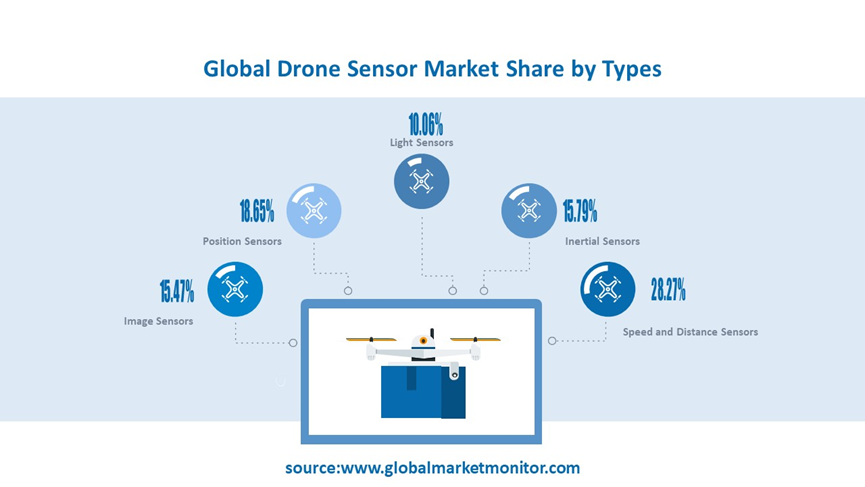 With the economic growth, scientific and technological progress, and the development of modern enterprises in APAC, there is a growing demand for drone sensor. Asia-pacific countries such as China and India have emerged as bright spots for global growth and an emerging market for the drone sensor industry. Asia Pacific is set to exhibit a considerable CAGR in the coming years owing to the up-surging demand for drone in countries, namely, China, Japan, and Singapore.

China became the global hub for drone manufacturing in the past six years. About 70% of the global civilian drone market is supported by China, which had about 1,200 drone manufacturers at the beginning of 2020 (up from 130 manufacturers in 2013). Moreover, Japan\'s drone sensor market is expected to witness rapid growth, in terms of technology and procurement. The Japanese government recently implemented new regulations for drone manufacturers and users, which may support the Japanese drones and drone sensors markets in the future. Moreover, the government took initiatives to improve the country\'s commercial drone industry and reach its goal of enabling drone delivery in Tokyo by 2020. The government announced its plans to establish a streamlined registry system by 2022, in order to offer more opportunities for drones. Similarly, the South Korean government has announced that it will invest over USD 1 billion in the drone industry over the next five years. The funds will be spent on research and development of drone technology by 2022. Such developments are expected to enhance drone usage and subsequently enhance the market prospects for drone sensors during the forecast period. Additionally, the number of small and medium enterprises (SMEs) is increasing day by day in these countries. It is, in turn, causing a high demand for drone sensor. In a word, the APAC region is expected to witness the highest growth rate during the forecast period as the existence of large population, developing technology, and affluence will drive the growth of drone sensor in this region. 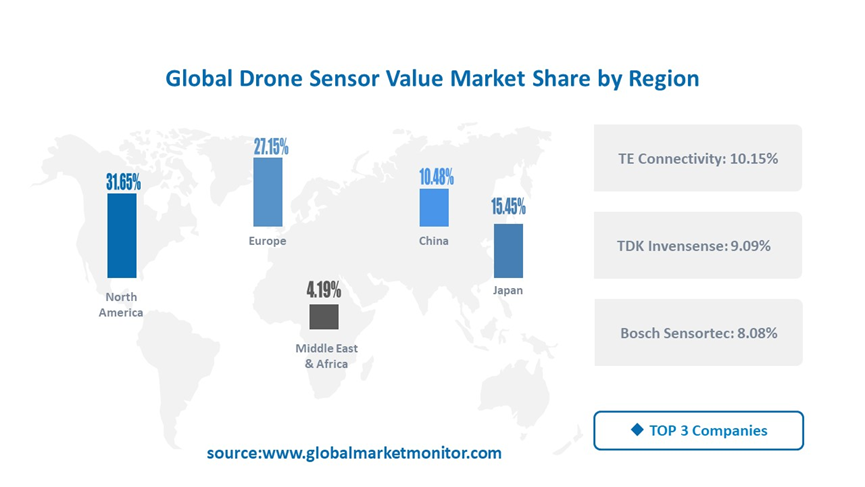 Increasing advancements in drone are benefiting the growth of the global drone sensors market. Growing demand for drones for mapping, accurate positing, high resolution imaging is a major factor driving growth of the global drone sensor market. At the same time, the demand for the drone industry is also growing. The growing applications of drones for various commercial purposes, like remote sensing; photo and videography; oil, gas, and mineral exploration; disaster relief, recreational uses, and other purposes are driving the growth of the drone sensor market. key factors driving the development of the market include the Growing demand for drones in end-user industries such as defense for intelligence and precision agriculture and surveillance, increasing demand for higher resolution imaging for mapping & surveying and accurate positioning for accurate navigation, enlarged crop vigor analysis for precision farming, and rising demand for drones from the commercial and logistics sectors for payload delivery. Increasing adoption of drones in agriculture sector for crop growth analysis is another factor fueling growth of the global drone market. Drones are used in defence sector for intelligence gathering, surveillance, monitoring, search and rescue operations, and various other purposes, coupled with increasing military budget especially in developing countries are factors expected to support growth of the global market. Furthermore, growing use of drones for package delivery and increasing investment in R&D activities for development of drone sensor with advanced technology are factors expected to boost growth of the global drone market in the near future. Additionally, the market growth is attributed to the increasing need for drone information analysis amongst businesses worldwide to perform various critical tasks remotely, such as automated mapping, cadastral surveying, corridor surveying, volumetric calculations, and LiDAR mapping. The growth in global demand for drones and increasing adoption of consumer drones have led to the creation of new government regulations, in order to balance innovation and safety. The Federal Aviation Administration (FAA) is expected to release new regulations in the U.S. that could propel Unmanned Aerial Vehicle (UAV) adoption in the region. Besides, global population is increasingly accepting the imminent trend of the drone as a far and wide accepted hobby. Casual enthusiasts and early adopters comprise a significant portion of the industry. Novel technology in electronics has also attracted gaming segment enthusiasts to accept drones as their new found source of entertainment with along with organizing various competitions. Increasing demand in drone are benefiting the growth of the global drone sensors market. 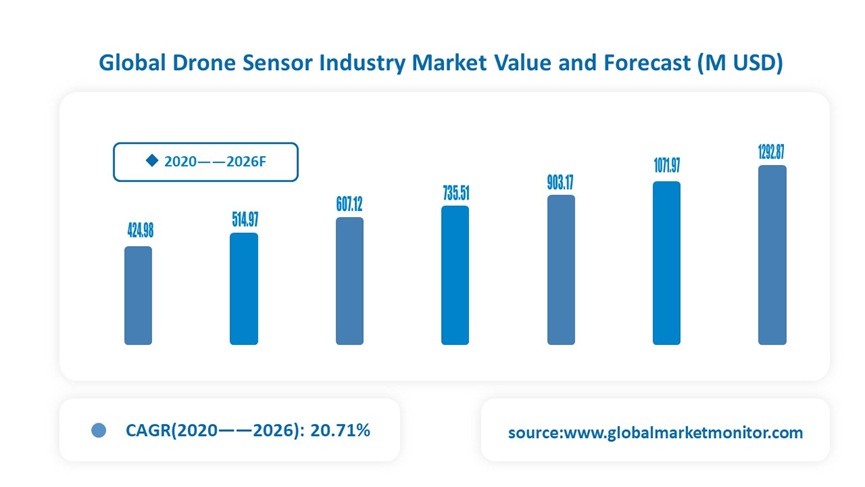