With the development of the times, the phenomenon of resource depletion is becoming more and more serious. People begin to focus on the recyclability of resources. Recyclable transport packaging is gradually gaining attention and utilization, and it is used in various fields such as food & beverage, chemical, construction, retail, industrial and logistics. Currently, retail and logistics account for the majority of the market share, and their market value has reached $169.24 million and $223.1 million respectively in 2019. 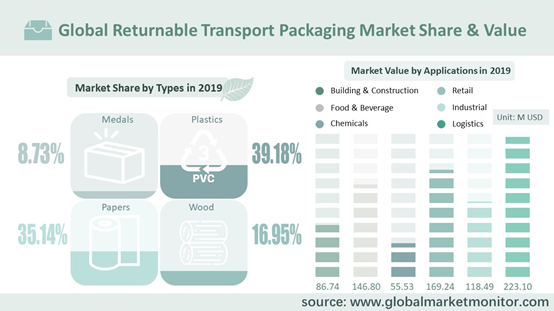 According to types, recyclable transport packaging can be classified into metals, plastics, papers, and wood. As the two most common types of transport packaging, plastic and paper type of recyclable transport packaging, occupy the majority of the market. In 2019, their market value has reached $8377.81 million and $1036.5 million respectively. With the epidemic gradually under control, people\'s desire to consume will increase significantly. It is estimated that by 2026, their market value will increase to $10156.45 million and $1348.13 million. 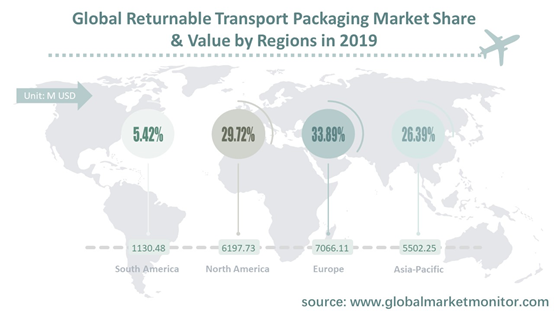 In 2019, the North America recyclable transportation packaging market has been valued at $6197.73 million, of which the United States accounted for 85.78% of the market share. Manufacturing has always been a key area of support for the US government. However, affected by the epidemic, logistics has been hit hard, people\'s income has fallen, and the desire to consume has been reduced as a result. In 2020, the market value of North America grew negatively for the first time, falling to $6015.25 million.

Europe is the largest revenue market, and its market value in 2019 has reached $7066.11 million. The outbreak of the epidemic is having an impact on the EU\'s recyclable transport packaging industry. In order to prevent and control the epidemic, European countries have adopted measures to implement closed management. The EU manufacturing industry has ended its short-term recovery, and the decline has accelerated again. The impact of the epidemic on the EU economy will continue, which may increase the uncertainty in the development of the recyclable transport packaging industry in Europe.

Under the Influence of the Epidemic, the Opportunities and Challenges of the Global Recyclable Transport Packaging Industry 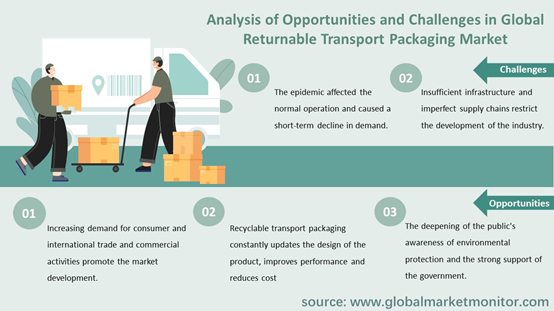 The impact of the outbreak of the epidemic on the r industry involves all entities in the industry chain. The raging COVID-19 has plunged the global economic environment into depression. Production and logistics were severely blocked, and many marketing activities had to be delayed, leading to a decline in market sales, and the company and employees\' income also declined. The government has also put forward higher requirements on the production and operation of enterprises for the prevention and control of the epidemic. Affected by this epidemic, the entire market will show a downward trend in 2020, and many final industries will not be able to operate normally. Many reductions in construction activities, declining food and beverage sales, and poor logistics have led to a reduction in the demand for recyclable transport packaging. In addition, inadequate infrastructure and imperfect supply chains in some regions have also restricted the development of the industry.

The global spread of COVID-19 has brought unprecedented severe tests to global economic development, and the global economy is facing greater downward pressure. The impact on the economy has led to a slowdown or even stagnation in economic activities in many countries, a substantial reduction in global demand.

The continued spread of the epidemic has had a profound impact on many aspects of the global society and economy. For the manufacturing industry, the production and sales of products will be greatly affected in the short term. The end of the global epidemic and the efficiency of response measures by countries around the world will directly affect the future development speed of the industry.

However, with the development of the economy and the progress of the times, the demand for consumer products in various fields will continue to increase. The continuous growth of international trade and the development of e-commerce have also directly promoted the demand for recyclable transport packaging. Besides, recyclable transport packaging continues to update the design of the product, thereby improving performance and reducing costs, which also promotes the further growth of the market. Therefore, the development potential in the industry is huge and it is worth investing in. At the same time, people\'s awareness of environmental protection is constantly deepening, and the government also strongly supports recyclable packaging to promote sustainable development, which will promote the continuous development of the market. It is estimated that by 2026, global returnable transport packaging revenue will rise from $790.56 million in 2020 to $1061.95 million.