The Landing of AR Leads 3D Sensing to A Better Realm

3D sensing technology is mainly divided into structured light, TOF, and binocular vision, in which different technical routes determine the accuracy curve and then the application scenarios.

The accuracy of binocular vision depends on the baseline distance, which requires high volume and is less used in consumer electronics; Structured light uses the principle that when light hits the surface of an object, the projection will inevitably be caused by the unevenness of the surface of the object, recorded and analyzed by the camera to produce depth images.

On the iPhone X, Apple put this technology into face recognition and put it on a dot matrix. To ensure the recognition accuracy, the dot matrix projector, and the receiver need to keep a certain distance. And the structured light is not resistant to strong light, and the laser lattice projected during the day is easily submerged by strong natural light. When the object is far away from the camera, the larger the image or light spot projected on the object, the worse the accuracy. Therefore, the structured light experience at close range is superior, but it cannot play an advantage at long distance.

The accuracy of TOF depends on the unit measurement time. In the future, D-TOF will be the key to long-distance applications. TOF, different from the structured light projection, measures the time something cost for a certain distance, thereby constructing a three-dimensional image. Specifically, after using a TOF sensor, an infrared laser array is used to emit laser pulses which are reflected from the object in front of it and then back to the sensor. In this way, by calculating how long it takes the laser to reach the target and return, you can calculate how far it is from the sensor.

3D Sensing technology which extends the scope of the imaging sensor cannot replace the 2D Sensing completely due to the cost. As we can see, the traditional image sensor and low precision image sensor have been still utilized in some fields including research, security, and industry, which means the 2D sensing will still occupy a place in image sensing.

3D Sensing Technology Is Currently Mainly Used in Mobile Phones, With A Penetration Rate of About 20%, And There Is Still A Lot of Room

As the most popular handheld terminal with almost one hand, smartphones are naturally the market with the largest proportion of 3D sensing in consumer electronics applications. The use of 3D sensing technology in mobile phones originated from Lenovo’s PHAB in 2016,and become known to the public until 2017. At that time, the proactive FacelD solution equipped with the iPhone X technology released by Apple is exactly the 3D sensing realized by structured light technology, mainly used as the face recognition unlocking and the payment.

The FacelD application was highly praised when it was released, but it was defeated by the combination of full screen and under-screen fingerprints in the actual application of domestic mobile phones. FacelD's bang is widely criticized, and its main phone-unlocking application is not significantly convenient for fingerprint recognition, which does not greatly improve the user experience. In 2018, some domestic mobile phones tried to use structured light in face recognition, but they did not continue to use it in the next generation models due to various reasons such as an immature supply chain and poor feedback. In 2019, LG and Huawei released mobile phones with proactive TOF, in which new applications such as gesture recognition have been expanded, opening up new ideas for proactive 3D sensing. 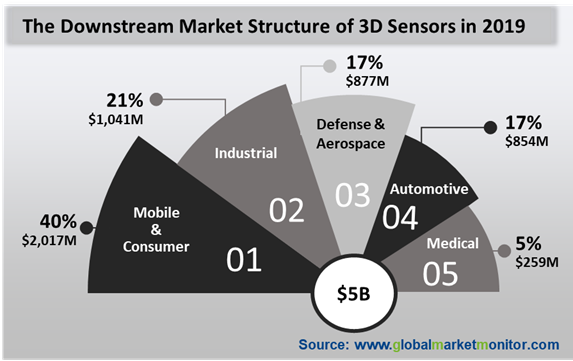 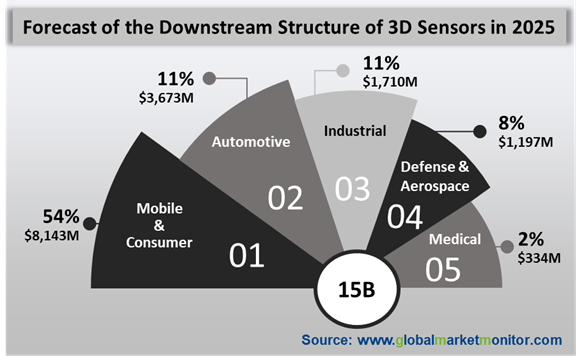 AR Technology Requires the Use Of 3D Sensing and Positioning, Which Is the Key to Be Mandatory One

As mentioned above, we believe that the key to 3D sensing from optional to mandatory is the application and popularization of AR technology. AR technology emphasizes the integration of human and machine and augments the functions in reality through computer assistance. AR glasses are also considered to be the next generation of mobile terminals. AR devices with only 2D sensing are incomplete, which is impossible to complete a reasonable interaction with the 3D world. AR ecological devices will surely be equipped with 3D sensing.

3D Sensing Is the Underlying Sensing Technology in the AI Era

Machines rely on cameras to capture real-world images. The traditional RGB camera can only capture the color information in the scene and cannot perceive the three-dimensional structure of the real world. Regardless of the distance, it is only a 2D plane for the machine. The role of the 3D perception hardware is to increase the depth information on the basis of RGB. The combination of AI and 3D sensing allows the machine to truly have the ability to perceive the three-dimensional world, which can digitally model objects in the real world, so that the machine can achieve the correct reconstruction of objects and respond appropriately.

Inside the Growing Global Chip Shortage

The Carbon Trading Market Continues to Advance, And Independent Carbon Verification Agencies Are Expected to Benefit