A Broader EGR Market Appears Under the CN-6

The implementation time of the CN-6 is getting closer and closer, which will set off a wave of related stock markets. At present, the voice of the market is starting to be agitated, and how many opportunities does the National Six standard bring. Most of vehicles under the CN-6 require to be installed of EGR systems, which will greatly increase the market demand for EGR systems.

CN-6 is the announcement issued by the Ministry of Environmental Protection on the pollution emissions, which is mainly optimized for the measurement standards and limits of exhaust emissions. Due to its relatively large standard upgrade, a certain buffer time is offered for the automotive industry in product upgrades, power changes, and mass production, which is taken by two stages of CN-6A and CN-6B.

EGR Is the Core Component to Reduce Nitrogen Oxide Emissions

Under the CN-6, the emission standards of multiple emissions have been improved a lot, resulting in the traditional SRC technology which has been unable to meet the requirements of the changed regulations is replaced by EGR to meet the increasingly higher emission standards. The EGR system is the current mainstream solution, less difficult and economically, which can effectively reduce emissions and improve the stability of the diesel engine.

EGR is the core component of the mainstream solution, which is installed on the engine exhaust pipe that is based on the command of the ECU engine to control the throttle valve, to divide the gas into two. One part is going through the EGR process and back to the engine to participate in the combustion again, and another is into the turbocharger to push the turbine and discharge. Through the EGR process for secondary combustion, the nitrogen oxide content of exhaust gas will be reduced by about 30-50 percent compared with the exhaust gas discharged in a single combustion.

EGR mainly introduces part of exhaust gas into the intake pipe and mixes with fresh air to enter the cylinder for combustion, which reduces nitrogen oxide emissions by reducing the maximum combustion temperature and oxygen concentration in the engine cylinder to destroy the production environment of nitrogen oxides.

On July 1, 2019, heavy trucks with natural gas took the lead in implementing the CN-6 Emissions Standard. In order to meet the emission requirements, their engines will be totally equipped with EGR. For diesel heavy trucks, EGR penetration is expected to reach 80 percent, and the upgrade of other models continues to drive the development of the EGR market, which is expected that EGR will begin to increase gradually from 2020, and explosive growth will begin in 2021. 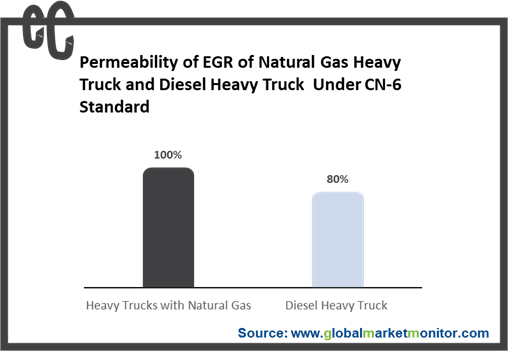