Glass fiber is a kind of inorganic non-metallic materials with excellent performance. It has a wide variety of advantages, including good insulation, strong heat resistance, good corrosion resistance, and high mechanical strength, but the disadvantages are brittleness and poor wear resistance. It is made of six kinds of ores of pyrophyllite, quartz sand, limestone, and dolomite, as raw materials through high-temperature melting, drawing, winding, weaving, with the diameter between a few microns and more than twenty microns, and each strand of fiber strands consists of hundreds or even thousands of monofilaments. Glass fiber is usually used as a reinforcing material in composite materials, electrical insulation materials, thermal insulation materials, circuit boards, and other fields of the national economy.

Enquire before purchasing this report-

The global fiberglass industry, originated from the United States, was born duo to the establishment of the Owens Corning Company in 1938. As conventional materials were scarce after the outbreak of the Second World War, glass fiber was used as an alternative material to meet military combat readiness needs. Subsequently, people discovered that this material has more and more advantages, using it in aircraft, tanks, body armor, and weapons, thus, the glass fiber industry has begun to obtain improve dramatically.

A Big Producer That Grew Up from the Cracks

The development of glass fiber in China began in 1958. Since glass fiber was initially used in the military field, developed countries in Europe and the United States imposed a technical blockade on China for a long time, resulting in a late start and slow development of China’s glass fiber industry. Though sixty-year accumulation, China has always insisted on independent research and development and made great progress. In seven years, the proportion has increased by nearly 12%, which can be seen is that the increase in global glass fiber supply mainly comes from China where the glass fiber industry is expanding rapidly, establishing a leading position in the world glass fiber market.

The fiberglass industry is a capital-intensive and technology-intensive industry, with strong industry monopoly. There are six major manufacturers, including Jushi, Taishan Fiberglass, CPIC, OCV, NEG, and Johns Manville, all of which account for more than 70% of the total global glass fiber production capacity. Under the structure that both the global market and the domestic market have the characteristics of concentrated production capacity, large-scale fiberglass companies have greater competitive advantages. Companies with weaker competitiveness are likely to be gradually squeezed out of the industry and emerging companies is hard to enter the market. 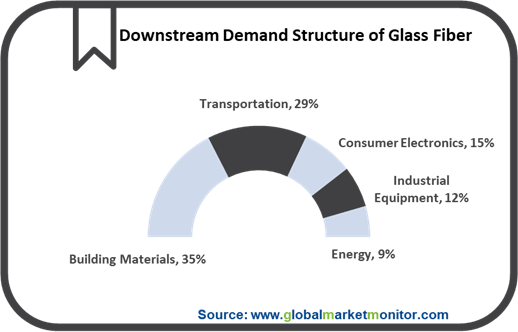 The continued downward trend in the domestic glass fiber industry in 2019 is due to the rapid deterioration of the relationship between supply and demand, especially the impact of new capacity. The industry's production capacity expanded rapidly from 2017 to 2018, and the original yarn production capacity was increased by 250,000 tons and 900,000 tons respectively in two years. Domestic demand is expected to rebound at the bottom in 2020, mainly due to the increase in wind power installations, the weak recovery of automobile production, and the PCB industry driven by 5G. It is expected that the demand for wind power yarn, thermoplastic yarn, and electronic yarn will further increase and that the building materials and industrial fields will be relatively stable.

Global energy and environmental policies have made lightweight traffic a long-term issue for the industry.